A Trillion for Your Thoughts: Surviving an IRS Audit 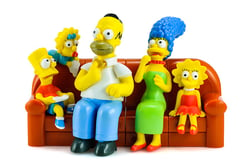 On December 17, America's funniest family will celebrate its 26th year of primetime lunacy. "The Simpsons" is no longer the most popular show on TV, but it still pulls in ratings strong enough for Fox to have renewed it through at least next year.

Way back in 1998, the show aired "The Trouble With Trillions," a classic episode still dissected and discussed among fans and comedy connoisseurs, and it was recently on pop culture website, A.V. Club. The show opens in Springfield as the ball drops on New Year's Eve. The sound of fireworks and cheers ringing in the new year wakes Ned Flanders, who, like all good citizens, immediately begins filling out his federal income tax forms.

From there, the animated cast careens through a number of story lines, many of which center on the joys and miseries of filing and paying taxes.

A.V. Club characterizes Homer Simpson as "the world’s laziest, dumbest tax cheat." At one point, a panicked Homer, scheming to scam the Internal Revenue Service, shouts out that daughter Lisa (a grade-schooler) is for tax purposes a clergyman, and the family baby, Maggie, "is 7 people" and son Bart (also in grade school) "was wounded in Vietnam!"

While the show's riffs on dubious tax deductions are funny, many people know from painful experience that being audited by the IRS is no laughing matter. Those who have gone through audits have had to produce financial records, answer questions posed by IRS agents, and have their financial lives laid open and carefully examined.

At the end of the audit process, the IRS might require you to pay even more in taxes. However, you can appeal the findings of the report. You can do so with the assistance of the attorneys at Robert J. Fedor, Esq., L.L.C.; experienced tax lawyers determined to help you get a favorable resolution before the tax court.