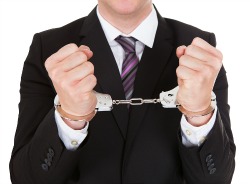 In latest news from the U.S. Department of Justice, we want to highlight this case of how unpaid employment taxes can add up quickly leading to serious consequences.  A Germantown, Tennessee, resident and business owner was sentenced to one year in prison and ordered to pay more than $10 million in restitution for failing to pay over employment taxes to the Internal Revenue Service (IRS).
The press release goes on to say:

“Payment of employment taxes is not optional,” said Principal Deputy Assistant Attorney General Ciraolo. “Nor are such withholdings an interest-free source of money to be tapped to make payments on lavish personal expenses. The sentence that Mr. Thornton received today reflects not just the harm that his actions caused to the U.S. Treasury but also the financial risks he placed on his employees by deliberately not filing their W-2 forms with Social Security on a timely basis.”

According to court documents, Larry Thornton, 67, was the majority owner, president and chief executive officer (CEO) of Software Earnings, Inc. (SEI), a Memphis company that produced and installed check processing. Thornton was also the 100 percent owner, CEO and president of First Touch Payment Solutions, LLC (First Touch), a Memphis company that provided merchant services for credit card processing. Thornton, as CEO and president of SEI and First Touch, had ultimate and final decision-making authority regarding SEI’s and First Touch’s business activities and had authority to exercise significant control over SEI’s financial affairs. Thornton admitted that he was responsible for collecting, accounting for, and paying over to the IRS federal income taxes and Federal Insurance Contributions Act (FICA) taxes that were withheld from the wages of SEI and First Touch’s employees.

Beginning in the second quarter of 2007, Thornton caused SEI to stop paying over the taxes required to be withheld from SEI’s employees’ paychecks and caused SEI to stop timely filing Employer’s Quarterly Federal Tax Returns, Forms 941, with the IRS. Beginning in the first quarter of 2010, Thornton caused First Touch to stop paying over the taxes required to be withheld from First Touch’s employees’ paychecks and caused First Touch to fail to timely file Forms 941 with the IRS. Between 2007 and 2011, Thornton collected more than $6.8 million in employment taxes from SEI and First Touch employees’ paychecks, but failed to pay those collected taxes over to the IRS. Thornton also failed to pay his companies’ matching share of FICA taxes during those years. During that time period, two of Thornton’s full-time accountants – both of whom were certified public accountants (CPAs) – warned Thornton about his failure to pay over employment taxes. Both CPAs resigned their positions due to Thornton’s unwillingness to comply with his employment tax obligations.

During the same years in which Thornton failed to comply with his employment tax obligations, Thornton spent more than $6.2 million from the business bank accounts on personal expenses, including house and condominium payments; vehicle, yacht and motorcycle loan payments; personal travel; and start-up funding for his wife’s beauty boutique. According to court documents, Thornton also failed to file personal and corporate income tax returns. As part of the guilty plea, Thornton admitted that his illegal conduct caused a tax loss of more than $8.9 million to the IRS.

“Larry Thornton’s efforts to conceal from IRS millions of dollars generated by his businesses afforded him a plush lifestyle for several years,” said U.S. Attorney Stanton. “But his illegal and illicit acts also have earned him a stint in federal prison and a multimillion-dollar restitution fee. We will continue to work with our law enforcement partners to pursue and bring to justice anyone who violates the nation’s tax laws.”

“Employment tax evasion results in the loss of tax revenue to the U.S. government and the loss of future social security or Medicare benefits for the employees,” said Special Agent in Charge Tracey D. Montaño of IRS Criminal Investigation (CI). “Failure to pay over withheld taxes is a serious offense. Corporate executives like Mr. Thornton have a responsibility to withhold income taxes for their employees and then remit those taxes to the IRS. IRS Criminal Investigation will vigorously pursue anyone who collects these taxes and uses the funds for their own personal gain.”

In addition to the prison term, Thornton was ordered to serve two years of supervised release. Thornton was also ordered to pay restitution in the amount of $10,822,728.99 to the IRS.

If you are facing a similar situation of unpaid payroll taxes, we can assist.  Our tax attorneys are skilled in providing aggressive representation to businesses throughout the nation. Trouble with the IRS over employment tax problems requires hard work to find solutions that keep companies open and business operating.  See how we can help you today.