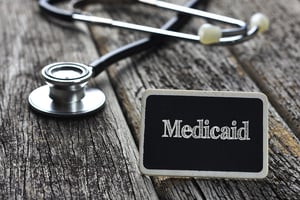 Sometimes, tax fraud takes the form of schemes and scams that take advantage of taxpayer funded programs like Medicaid.

In early November, nine Cleveland residents were indicted on 28-counts related to fraudulent bills submitted to Medicaid, a taxpayer-funded public health program. While the intricacies of the criminal enterprise are complex, the scam itself was pretty simple—bill the government health program for services that were never rendered.

Unfortunately, Medicaid fraud is common. Although the aid program is intended to assist those unable to afford care, fraudsters often take advantage of the vast and complicated billing process in the hopes their scheme will not be identified by the FBI, IRS, or a Medicaid Fraud Control Unit.

In this set-up, nine people involved with a non-profit group, Eye for Change Youth and Family Services in Cleveland, were involved in the fraud. Working in concert, the defendants submitted invoices to Medicaid for appointments that never occurred. Medical records were falsified to support the billings, and a Licensed Independent Social Worker was paid off to use her credentials and license number to submit the billings.

The defendants failed to provide documents needed to verify billings such as records of psychiatric evaluations and ongoing treatment plans. This was no victimless crime – clients of the non-profit whose Medicaid numbers were used for billing received restaurant gift cards and other kickbacks in exchange for using their Medicaid credentials. These individuals received no services but are now involved in a Medicaid fraud which could limit their access to services going forward.

The owner of the non-profit, Alfonzo Bailey was charged with money laundering. Federal agents identified $1.5 million in real estate purchases. In addition to seizure of the real estate, the government hopes to claw back approximately $2.3 million from Mr. Bailey that was traced to the gambit.

It is unlikely the ill-gotten gains gleaned from the Medicaid fraud were reported on income tax filings. Few individuals engaged in tax crime claim income from the deed, but the filing of fraudulent tax returns inevitably adds to the criminal tax charges at the end of the day.

An FBI representative notes, “These individuals engaged in a scheme to defraud tax-payers by submitting fraudulent billing to a federally funded healthcare program, which is supported by hard-working citizens. The FBI and our partners will continue to root out such fraud and hold those engaged in illegal financial dealings responsible in a court of law.”

Tax crime pays until it doesn’t. When you are in too far, and you need to know the best route out—speak with a trusted criminal tax defense lawyer in your area.