Counting Down the IRS Top Ten Tax Fraud Prosecutions of 2021: #3 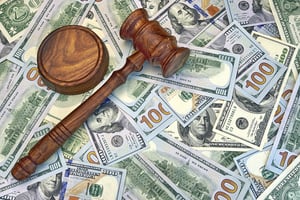 The Criminal Investigation arm of the IRS stays busy. With more than 3,000 agents worldwide, IRS-CI is focused on bank secrecy act violations, criminal tax fraud, money laundering, and tax evasion. Earlier this year, the IRS ranked its top ten prosecutions of 2021, and we are now down to number three. This case involves tax evasion, false debt portfolios, bankruptcy, and the Paycheck Protection Program.

Joel Jerome Tucker, a 53-year- old entrepreneur, resided in Johnson County Kansas, and conducted business in Wyoming, Missouri, Kansas, and Colorado. Between roughly 2002 and 2016, Mr. Tucker owned several businesses that harvested and sold loan application information to payday lender clients. His primary company, eData, maintained payday lending software for clients as well. His companies did not make loans but offered information about people seeking loans to entities that did. In 2012, Mr. Tucker sold eData to the Wyandotte Indian tribe.

Despite the sale, Mr. Tucker retained a data file with 7.8 million leads he had put together when he owned eData. The data contained personal contact information, bank account information, and personal identifying information like dates of birth and social security numbers. Using the data, Mr. Tucker created and sold fake debt portfolios. According to the IRS, Mr. Tucker sold debt files he did not own, debt files that had already been sold to others, and completely fictitious loan files on individuals who withdrew their loan application or were never provided a loan. In selling the fraudulent data, Mr. Tucker garnered $7.3 million in just two years.

Between the years 2014 and 2016, Mr. Tucker and five of the companies he owned failed to file federal tax returns. When interviewed by IRS agents, Mr. Tucker asserted he was living on money borrowed from his mother. During the IRS criminal tax investigation of the matter, it was determined Mr. Tucker was sending money to his mother and that he used shell accounts to hide his income and assets. Among his many expenses were a Cadillac Escalade, luxury accommodations in Vail, Colorado, and leases on a residence, a Porsche, and a Ferrari, among other expenses.

Mr. Tucker conducted extensive tax and fraud schemes for years. He will spend the next 12 years and six months in federal prison without the possibility of parole. He will also pay more than $8 million in restitution to the IRS plus other fines.

Serving clients nationwide from offices in Cleveland and Chicago, the law firm of Robert J. Fedor Esq., LLC provides trusted representation with criminal tax and compliance matters. Call us at 800.579.0997 or contact us today.