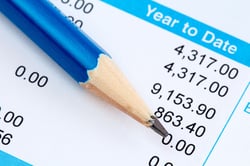 When you own a Cleveland business and pay employees, you must withhold federal payroll taxes. Payroll taxes include federal income taxes and social insurance taxes (paying for Social Security and Medicare). When these taxes are withheld from employee wages, the funds are supposed to be sent by the employer to the Internal Revenue Service.

When that transfer of funds does not take place, the IRS is relentless and unforgiving. The agency is known for its long memory too, as a recent case illustrates. An Arizona businessman was recently sentenced to 15 months in a federal prison after repeatedly ignoring IRS warnings to turn over the $860,000 in unpaid payroll taxes from his business.

The owner of a medical supply company has admitted to collecting the taxes from employees' wages for a dozen years and not turning the money over to the IRS. He also admitted that he had not paid the employer's share of the taxes, for a combined tax bill of $1.4 million.

He agreed to the violations as part of a plea deal that enables him to avoid spending five years behind bars, the maximum allowed under the law.

A newspaper article quoted prosecutors in court documents, saying the man's refusal to pay the taxes "was very long term, consisted of innumerable discrete criminal acts, and cheated the government of a lot of money." Prosecutors had asked for a two-year sentence for the man, who has also agreed to pay the tax debt he owes.

Perhaps part of the court's willingness to sentence him to less than what prosecutors sought is that he negotiated the plea before criminal charges against him were filed.

In similar situations, Ohio business owners who believed they were under investigation and faced possible indictment have retained experienced tax attorneys to enter into discussions with the IRS. In some cases, indictment can be avoided entirely.