Deal with Tax Evasion Charges Before it Comes to This 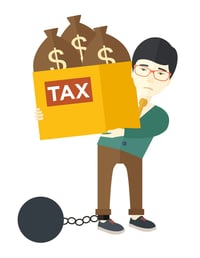 Here in Ohio, we have had more than our share of eccentric politicians who have on occasion run into legal troubles. The list is fairly extensive, with three state representatives being convicted on various charges last year and another pair convicted the year before.

So we are really in no position to be smug when hearing of cases elsewhere, such as the recent story out of New York in which a Long Island town official recently admitted to failing to report more than $2 million in income on his federal income taxes.

The commissioner of planning and development for the Town of Oyster Bay pleaded guilty to income tax evasion in a federal court over his failure to disclose to the Internal Revenue Service the earnings from his consulting work from 2008 to 2013. The 77-year-old has agreed to pay restitution to the IRS, plus interest and penalties.

According to a local newspaper, the man didn't report the income on either his individual tax returns or on the tax forms filed for companies he controls.

We don't know details of this case, but in many similar situations a person who has failed to file or failed to report income can get back in compliance with the IRS before criminal charges are filed. The skilled attorneys at Robert J. Fedor, Esq., L.L.C. have negotiated return-to-compliance terms for clients who had for one reason or another failed to pay owed federal income taxes.

Past-due tax returns and other documents can be done in-house at our Cleveland office. Negotiations with the IRS are carried out by our attorneys. If negotiations do not yield acceptable terms, our lawyers provide vigorous, effective representation in litigation. Please see our page titled Experienced Tax Lawyers Handling Criminal Cases for more information.