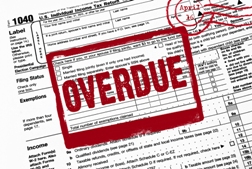 Some people are by nature procrastinators. Others have mastered the art of avoidance or plain old ignoring the problem in hopes it will just goes away. In most cases, however, these tactics are not successful. This is especially the case when dealing with the IRS and matters related to filing and paying one's taxes.

While it's tempting to simply ignore the communications embossed with the official IRS seal, doing so doesn’t erase the fact that the IRS knows you owe them money. Delinquent tax filers and payers should do themselves a favor and simply face the music and deal with their tax problems sooner rather than later. The IRS has a long memory and a systematic approach to dealing with delinquent taxpayers which may include the garnishment of wages, liens and even criminal tax charges.

In cases where an individual is late in filing their taxes, it's wise to do so as soon as possible. Failing to file based on the belief that there’s no point because one can't pay what they owe only serves to compound the problem as late filing fees also then accrue. It's always, therefore, best to file and then work to establish a plan on how to repay IRS tax debts.

Despite its cold and non-compromising reputation, when it comes to back taxes and tax debt, the IRS is willing to work with taxpayers. For example, a taxpayer may work to repay debts over time through an IRS installment agreement. In other cases, an individual may apply to an IRS amnesty program and have all or a portion of their tax debt forgiven.

If, after talking to the IRS, an individual is still having difficulty figuring out a solution to their tax problems, the Tax Advocate Service may be able to help. Once an individual has a plan in place to deal with their tax debt problems, it's important to take steps to ensure similar issues don't crop up come tax time next year.

Source: Forbes, "9 Tips To Help Dig Out Of Tax Trouble On National Get Out Of The Doghouse Day," Kelly Philips Erb, July 21, 2014