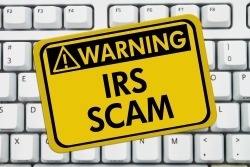 There’s no getting around it. April 15th shows up every year and with it, the Internal Revenue Service. And every year, the IRS rolls out its “Dirty Dozen” list of tax scams of which taxpayers should be aware. This year’s list is topped by identity theft, especially damaging when a criminal steals your Social Security number and uses it to file a fraudulent tax return.

In this installment of our Cleveland tax law blog, we’re going to look at just 5 of the dozen scams. We will include a link to the complete list, so look for that below.

The IRS says offshore tax avoidance is a scam. People who have used the offshore accounts to try to avoid paying owed taxes should voluntarily go to the IRS and get into compliance. As our readers know, it usually makes much more sense for a person with unreported offshore assets to sit down with a tax attorney who can help across the wide spectrum of issues you might face.

• “Inflated refund claims”: another scam, says the IRS. Any preparers who promises you a windfall refund before even examining your records might be up to something illegal, the federal agency says.

• Padding deductions: resist the temptation to pad your deductions, the taxman says. “Think twice,” the IRS says ominously in its statement.

• Frivolous tax arguments: a pet IRS peeve. Promoters of these schemes talk folks into making outrageous claims on their tax forms in the mistaken belief that the federal government doesn’t have taxing authority, for example, or that only federal employees truly only federal income taxes or that only foreign income is taxable, etc. All ideas that have been tried before and tossed out in courts.

You can read the rest of the Dirty Dozen list here.  The experienced tax lawyers at Robert J. Fedor, Esq., L.L.C. can determine what is best for you, your family and your assets. Sit down with Cleveland tax attorneys who understand not only the nuances of the law, but also its short- and long-term repercussions.