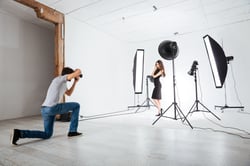 An industry that vies for attention is receiving unwelcome scrutiny from tax authorities in Italy.

In a contemporary twist on an old yarn, fashion house Gucci is accused of tax fraud and evasion.  Although it has long had Swiss operations, Gucci has recently run afoul of Italian investigators who claim the enterprise is shielding profits in Switzerland that should have been reported in Italy.  Needless to say, Swiss taxation schedules are more charitable to Gucci than Italian tax rates.

Gucci is a well-known brand that has enjoyed a steep turnaround in recent years.  According to The New York Times, the company reported more than a 49% increase in sales in third-quarter, 2017. Owned by the French group, Kering, Gucci states it is cooperating with authorities, and remains “confident about the correctness and transparency of its operations.”

When the tax authorities are knocking on your door

For any business, an inquiry or notification from the IRS that the agency is commencing a tax audit, or worse, a criminal tax investigation, is a chilling moment.  In early December, Italian tax authorities searched two Gucci properties, the 377,000 square-foot Milan facility, and its Florence offices.  Italian authorities claim the company could face a record tax bill of $1.54 billion.

While the rising fortunes of Gucci may have made it a target of Italian tax authorities, it is far from alone in stings in recent years on the tax practices of Italian fashion and luxury brands. Other companies have resolved allegations of tax evasion by paying large settlements, including Prada, which paid an estimated $571 million, fashion house Bulgari that settled for $78 million, Giorgio Armani, who settled for $373 million and the designers Dolce & Gabbana, who were convicted and sentenced to 18-month prison terms for tax evasion and tax fraud, only to have their convictions later overturned.

Adding to Italian tax coffers, tech giants Google and Apple settled tax investigations for approximately $334 million and $350 million respectively.  Italian investigations into the tax practices of Amazon and Facebook remain open.  Purportedly, some of the success of the Italian government in pressing tax evasion charges is fueled by an agreement made between Switzerland, Italy, and other tax havens to report individuals or companies who do not otherwise make a declaration of monies maintained abroad.

There is nothing particularly new or fresh about these types of tax evasion, except that government and taxing authorities are becoming more collaborative in their efforts toward transparency and reporting in the digital age.

If you, or your company, are advised of a criminal tax charge, quick action can often avoid the reputation and brand damage that results from litigation and loud headlines.

Discreet, knowledgeable help with criminal tax matters in the US and abroad

With local offices in Cleveland, and Chicago, the tax attorneys at Robert J. Fedor Esq., LLC offer aggressive defense and strategic solutions if you are challenged with offshore tax crimes or other tax controversy.  When you have questions about tax audits, we have answers. Contact us today.