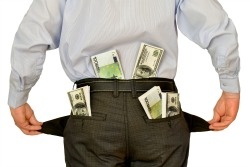 The Department of Justice released news this week that Terry DiMartino, 62, was convicted of one count of corruptly interfering with the due administration of the internal revenue laws, two counts of filing false tax returns and five counts of willfully failing to file tax returns. DiMartino was an insurance salesman for numerous insurance companies located in Connecticut and elsewhere. Despite earning millions of dollars in insurance commissions over the last decade, DiMartino did not file accurate tax returns or pay the taxes owed.

The release goes on to say, “As we approach the end of the tax return filing season, today’s verdict serves as a clear reminder that willfully failing to file, filing false returns, and attempting to obstruct the Internal Revenue Service (IRS) are crimes and those U.S. taxpayers who engage in such criminal conduct face prosecution, substantial fines and restitution, and prison,” said Acting Assistant Attorney General Ciraolo. “The department is committed to working with its partners in the IRS to enforce our nation’s tax laws by holding offenders such as Mr. DiMartino accountable.”

According to the evidence presented at trial, DiMartino attempted to obstruct the IRS by mailing false documents to the IRS, including three false tax returns for the 2007 tax year, one of which requested a fraudulent $14 million refund. He sent false and threatening correspondence to the IRS in an attempt to defeat the IRS’s assessment, collection and investigative efforts. He submitted false and threatening correspondence to insurance companies that sought to cooperate with the IRS collection activities. DiMartino also set up nominee entities which he used to divert his insurance commissions. He used the nominees to hide and conceal assets to prevent the IRS from collecting on his tax liabilities. DiMartino has not filed an accurate individual income tax return since the 1996 tax year.

“The IRS enforces the nation’s tax laws, but also takes particular interest in cases where someone, for their own personal benefit, has taken what belongs to others to include the American taxpayer,” said Special Agent in Charge Manny Muriel, IRS Criminal Investigation. “Taxes are the price we pay for the public goods and services we want; yet Mr. DiMartino tried to undermine and corrupt the tax system when he attempted to steal $14 million in taxpayer money. Furthermore, he tried to intimidate insurance companies that sought to cooperate with the IRS. As the stewards of your tax dollars, the IRS will stand to protect and defend the American taxpayer.”

If you have any concerns about the IRS or tax evasion, the best thing you can do is to contact a criminal tax attorney. Contact Robert J. Fedor if you have any questions or concerns.