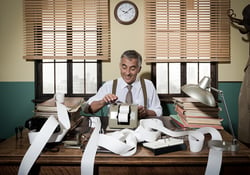 It is sometimes difficult to make financial decisions. You must first weigh the positives and negatives and assess the pros and cons before making a sound choice. Even the Internal Revenue Service can struggle to make decisions, a business publication reports.

The agency had difficulty deciding on a penalty for business owners who fail to file required payroll information, but has finally settled the issue. Unsurprisingly, perhaps, the IRS has decided on a penalty calculation for failure to file information that will result in the most expensive assessments, Business Management Daily reports.

The publication points out that if you fail to file W-2s or 1099s, the penalty the greater of two possibilities: $530 or 10 percent of the aggregate amount that was required to be reported. The IRS apparently had difficulty in deciding how to determine those aggregate amounts.

According to the publication, the IRS says the "penalty is based on the average reported on all returns."

In some cases, a failure to file can result in not only large penalties, but also criminal charges. In those situations, contact the skilled tax law attorneys of Robert J. Fedor, Esq., L.L.C. to discuss the circumstances of your case, as well as defenses and negotiations with the IRS.