Is the IRS Flying the Friendly Skies? 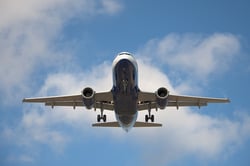 There is little doubt that few people would want to fly on an airline owned by the Internal Revenue Service. No bag of peanuts could be worth that. While we don't know of any plans for the IRS to take to the skies, we do know that there are plans for the agency to put a dent in some people's travel plans.

Forbes reports that if Congress has its way, the State Department and IRS will team up to deny, limit or revoke passports for people who owe at least $50,000 in delinquent taxes. The impending change could throw yet another wrench into the lives of the 8 million Americans living overseas.

Forbes contributor Robert W. Wood provides more details about how the addition to the tax code would work. For individuals, "in all likelihood, it will mean no new passport and no renewal." For a business owner who has a "seriously delinquent" tax bill, it could mean financial disaster.

It should be noted that the $50,000 figure includes not only delinquent taxes but also interest and penalties. If the taxes owed date back a few years, the add-ons might now exceed the original debt.

Wood writes that the State Department would reserve the power to issue passports in emergencies. Without special dispensation, you will be forced to choose between travel and paying taxes.

He also points out that passport revocation/limitation/denial will apply to people who are not in danger of having criminal charges filed against them or who are threats to flee. It might well be that people who owe upwards of $50,000 and have received a notice of tax lien from the IRS might find their ability to travel shut down.

It's also possible that this addition to the tax code, though already passed by the House and Senate, will not stand up to scrutiny by the courts. Unless, and until, it is determined to be unconstitutional, the State Department and IRS would hold even more cards than they do now.

Taxpayers facing travel limitations, a lien or criminal charges can speak with attorneys experienced in negotiating favorable outcomes with the IRS.