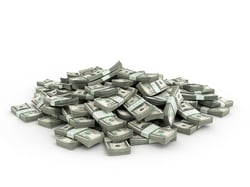 He was an apparently savvy emeritus professor of business administration. Dan Horsky amassed a fortune of $200 million by investing in start-ups, according to an article in the Wall Street Journal. However, Horsky recently paid half of that -- $100 million -- in a penalty to the Internal Revenue Service for hiding his vast wealth and failing to pay required taxes on it.

The IRS says that those taxpayers who don't pay their overseas taxes and who fail to file a Report of Foreign Bank and Financial Accounts (FBAR) can wind up owing half of their hidden offshore bank account's balance. The Journal cites a source who said the professor's failure to file fine "is likely the largest FBAR penalty ever."

Horsky's money was apparently held in a Zurich bank. He "went to great lengths to hide assets in secret accounts overseas in order to avoid paying his share of taxes to the IRS,” the federal prosecutor said, adding that the Department of Justice plans more prosecutions for FBAR violations.

Horsky is 71, the Journal reports. The University of Rochester professor faces up to five years in federal prison after pleading guilty to conspiring to defraud the United States and to submitting a false expatriation statement to the Internal Revenue Service.

Believe or not, he also faces more financial penalties in the matter. The $100 million penalty does not include any restitution the court might order, the Department of Justice said in a press release.

The DOJ statement did not include the names of the companies Horsky invested in.

Regular readers of our tax law blog might recall that last month the IRS said its voluntary disclosure programs have raked in more than $10 billion, with about 100,000 people using them to return to compliance.

If you have not filed a required FBAR, a Chicago or Cleveland-based tax attorney at Robert J. Fedor, Esq., LLC, experienced in resolving FBAR-related concerns can begin the process of securing a non-prosecution agreement and filing required documents. Learn more about reporting foreign assets by clicking below.