Legislators Look to Boost Ohio Business by Phasing out CAT 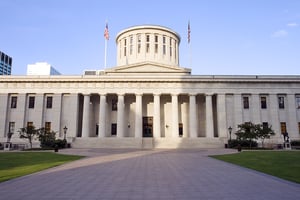 Some Ohio legislators would like to reduce and then eliminate the CAT tax.

In the United States, forty-four states assess a corporate income tax. Washington is not one of those and instead taxes corporate gross receipts. That tax, called the commercial activities tax (CAT) is assessed at .26 percent on gross annual receipts over $150,000.

The tax went into effect in July 2005. At the time, the CAT replaced the tangible personal property and corporate franchise tax. While the tax is paid on a quarterly or annual basis, approximately 65 percent of Washington companies do not pay the CAT at all, based on their gross receipts. Companies with sales totaling $1 million or less pay a nominal flat rate of $150.

At the time the CAT was initiated, it was recognized that its impact to companies would not be across the board, and would affect higher earning enterprises. Overall, the CAT currently collects about $2 billion per year, which represents about 6.5 percent in state revenue.

Ohio Republican legislators Jennifer Gross and Riordan McClain have sponsored House Bill 234. The bill would reduce the CAT tax by 20 percent each year, until it is entirely eliminated.

While initiating one tax while phasing out another mitigates the loss to state revenue, this bill offers no replacement program. In 2005, when the CAT was implemented, although business tax liability fell, funding for state government and local public schools dropped to the tune of billions of dollars.

One idea being floated is to join the majority of states in the Union and create a corporate income tax. Despite claims otherwise, business tax rates in Ohio are lower than the national average. There are a number of options, including swapping out the CAT for a return to a corporate franchise tax—or a combination CAT and corporate tax.

As one might imagine, the loudest voices against the CAT are those who are likely paying it. Overall, taxation based on gross receipts is an idea whose day has probably come and gone. Legislators have some room to modify or eliminate the CAT while ensuring important state funding is not lost altogether.

The legal team at Robert J. Fedor, Esq., LLC delivers experienced legal representation to clients throughout the U.S. and abroad on matters of business compliance, bankruptcy, and IRS civil or criminal tax audits. When you have questions about compliance, call us at 800-579-0997 or contact us. We have offices in Cleveland and Chicago.