Living In Your Own Private Tax Haven 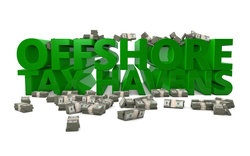 American companies have done it. Why can’t you? It’s inversion, the tax-avoidance strategy used by Burger King, Medtronic and other giants to avoid paying the Internal Revenue Service. By merging with a foreign corporation, the U.S. companies can shield significant income from Uncle Sam. If they can do it, why can’t you have your own private, personal inversion?

The Wall Street Journal notes that more than 70 percent of Fortune 500 companies have subsidiaries in tax havens (a majority of which are in the Cayman Islands or Bermuda). So why can’t you do it? For one thing, there is a giant obstacle in your way known as FBAR (Report of Foreign Bank and Financial Accounts). Americans who have holdings of more than $10,000 total in offshore accounts must file the report.

A Wall Street Journal contributor recently noted that offshore tax loopholes enable U.S. corporations to avoid $90 billion in taxes each and every year.

The companies stashing money offshore include household names: Apple (with more than $100 billion stashed offshore), Nike, Pfizer and Citigroup. The list goes on and on.

A report issued two years ago by U.S. PIRG Education Fund and Citizens For Tax Justice said Congress should fix the problem. The IRS has focused for the past few years on individuals with offshore accounts, however.

Those individuals who have foreign bank accounts and are not yet in FBAR compliance can sit down with a Cleveland tax attorney who understands not only the law, but is also experienced in obtaining non-prosecution agreements for clients.