House Painter Hides $4 Million from IRS, Paints Himself into an Indictment 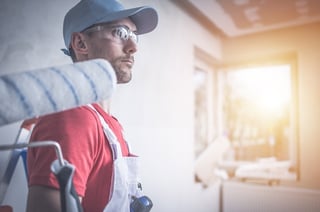 A Massachusetts business owner has been indicted for attempting to obstruct the internal revenue laws, aiding and assisting in the filing of fraudulent corporate, personal, and employment tax returns, tax evasion, and structuring financial transactions. While apparently a very successful painter, he may not be as successful at paying his taxes.

The details from the Department of Justice press release:

According to the indictment, Nicholas Boulas, of North Reading, owned and operated Nick’s Painting Service Inc. (NPS), which provided painting services to residential and commercial customers in the Boston area.  From 2009 through 2014, Boulas allegedly concealed approximately $4 million in business receipts by cashing approximately $2.7 million in checks and directing a substantial number of customers to write checks to him personally, which he cashed and deposited using multiple personal bank accounts.  According to the indictment, he structured cash transactions to involve less than $10,000 in currency in order to evade the banks’ reporting requirements – banks are required to file reports with the U.S. Treasury for transactions involving more than $10,000 of currency, conducted by or on behalf of the same person on the same day.

The indictment alleges that Boulas caused the filing of fraudulent corporate and personal income tax returns that underreported NPS’s gross receipts, and as a result, the income Boulas earned from NPS.  It further alleges that Boulas underreported income he earned from several rental properties.  Boulas also allegedly paid employees “off the books” in cash to avoid paying payroll taxes, and caused the filing of fraudulent employment tax returns that concealed the number of NPS’s employees, wages paid and taxes owed.

Boulas is also charged with obstructing the internal revenue laws by, among other things, falsely stating to IRS special agents that he reported all of NPS’s income, obstructing an IRS summons and following his interview with special agents, altering checks he received from NPS customers to conceal the memo line and hide the purpose of the payments.

An indictment is not a finding of guilt.  Individuals charged in indictments are presumed innocent until proven guilty beyond a reasonable doubt.

If convicted, Boulas faces a statutory maximum sentence of five years in prison for tax evasion, three years for obstructing the internal revenue laws, three years for aiding and assisting in the filing of fraudulent returns and ten years in prison for structuring financial transactions as a part of a pattern of illegal activity involving more than $100,000 in a 12-month period and while violating another law of the United States.  He also faces a period of supervised release, restitution and monetary penalties.