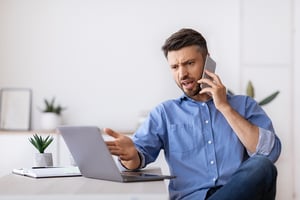 Business owners in Ohio are steamed over several proposals associated with President Biden’s reconciliation bill and they are letting Washington know about it.

Part of the plan for funding the multi-trillion reconciliation bill proposed by the Biden Administration is a kick-start of the Internal Revenue System (IRS). That means providing billions of dollars to the agency over the next ten years to update its technology, data collection, and enforcement capabilities.

The idea is that a fully funded tax agency could finally pursue and prosecute taxpayers who commit tax fraud, offshore tax evasion, and other tax crimes in the U.S. According to the U.S. Department of the Treasury, the IRS is currently unable to collect approximately 15 percent of taxes that are owed. As the tax gap in the U.S. (the amount of taxes actually collected compared to what should be collected) continues to grow, the collection capability of a funded IRS becomes an attractive proposition.

In a statement, Deputy Assistant Secretary for Economic Policy Natasha Sarin notes better funding of the IRS would not boost the audit rates for those earning under $400,000 per year. Instead, she notes, “these proposals are about targeting enforcement actions where they belong: on higher earners who do not fully report their tax liabilities.”

So why is the Ohio business community riled? A recent proposal from the Biden Administration suggests that banks report the amount of money flowing into and out of banks on an annual basis (not individual transactions as has been reported).

Still business leaders are considering the proposal an invasion of privacy. Bob Palmer, CEO of Community Bankers Association of Ohio, says the measure would be high cost and inconvenient to financial institutes. William Gale, from the Brookings Institute says the opposite, he notes tax noncompliance is significant for high-income earners, while wage earners tend to pay what they owe.

In a statement to Speaker Pelosi, Secretary Yellen, and others, several Ohioans signed a letter objecting to the plan.

Meanwhile, 20 Ohio business groups, including the Ohio Society of CPAs also made their displeasure with Washington known in a letter to the Ohio Congressional Delegation members. Of interest to this group is a proposal to eliminate the tax deduction for pass-through businesses and the increase of the federal tax rate.

Strong opinions around taxation are a legacy of the United States. Tax evasion is not. It will be interesting to see how this turns out.

The legal team at Robert J. Fedor, Esq., LLC delivers experienced legal representation to clients throughout the U.S. and abroad on matters of business compliance, fraudulent tax returns, bankruptcy, and civil or criminal tax audits. When you have questions about compliance, call us at 800-579-0997 or contact us. We have offices in Cleveland and Chicago.