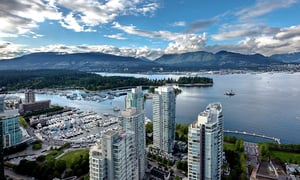 Vancouver, British Columbia (BC) is known for its setting between mountain and sea, and for the rampant overgrowth that has made the city friendly to all manner of tax crime.

Dirty money—loot from organized crime, money launderers, and absent foreign investors have extinguished the idyll of the city, creating enormous gaps in wealth and destabilizing a once-thriving middle class way of life.

Media reports identify million dollar properties held by shell companies or owned by those convicted of money laundering and since deported to China.  In 2019, the provincial government in British Columbia estimated that the “large-scale transnational money laundering” that occurs within BC is valued at about $5 billion—and that is an estimate that encompasses only the real estate market.

Canada, like the United States, is an attractive target for foreign money launderers looking to wash dirty money through to other regions of the world.  While illicit money channels flow between Europe and Canada, Canada also sees significant money traffic between itself and western and eastern Asia.  Prime Minister Justin Trudeau stated, “This is a real and pressing problem for Canadians and it’s a problem around the world that Canada is going to continue to lead in the fight against.”

In Vancouver, authorities are besieged by copious amounts of cash deposited for luxury cars, condominiums, boats, and high-end spending that deposits money in Canadian banks to chill until it is ready to be routed out of the country.  From casinos to horse racing, the province is a monetary money dump.  In one novel scheme, international students register for programs and cancel classes prior to the start date.  Charged with a minimal cancellation fee of $100 or so dollars, a student might deposit thousands of dollars in cash from which the fee is taken by the school—leaving the educational institution to launder the rest.

Since before the turnover of Hong Kong in 1997, Vancouver, BC, has been a destination for high-wealth individuals, families, and corporations.  Offering citizenship, valuable property, and relatively lenient law enforcement, Vancouver became a magnet for Asian wealth.  Vancouver is an international city with easy global ties to financial markets.  In short, an ideal place to park or wash your cash.

Vancouver is a go-to location for those wishing to stash cash from China, Mexico, and some European countries.  Even as investigations are undertaken, there does not appear to be any organized means of addressing the tax crime, offshore tax evasion, and dirty money that sullied a once beautiful city.

For Americans, Vancouver is a pretty place to visit—and possibly invest your wealth.  If you do, be sure to speak with an experienced tax attorney.  The United States is not as near as forgiving about money gone missing in foreign bank accounts as our neighbors to the north.

With offices in Chicago and Cleveland, Robert J. Fedor, Esq., LLC provides experienced tax defense for persons or entities notified of an IRS investigation or other tax challenge.  Contact us or call 800-579-0997 today.