Paid Your Taxes and Still Got a Notice from the IRS? 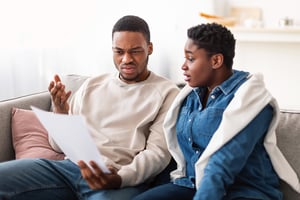 In early June, the Internal Revenue Service (IRS) mistakenly sent notices to millions of couples who filed jointly letting them know their taxes were overdue.

Worried taxpayers began following up with the IRS and their accountants to better understand the correspondence and the tax amounts listed by the IRS. In July, the agency posted a low-key statement on their website about the CP14 (balance due) notices.

The statement notes the IRS “is aware” that some couples mistakenly received notices concerning their 2021 returns. Apparently, the IRS failed to correctly apply payments to some joint taxpayer accounts. As a result, those same couples received notices that their taxes were due.

The IRS clarified that couples who receive the notices do not need to follow up with the agency at this time. Given the already diminished capability of the IRS to respond to telephone queries from taxpayers, the notices have probably generated considerable telephone traffic.

While it is “researching” the issue, the IRS notes couples who mistakenly received the notices need not worry about fines or penalties—the agency will automatically adjust the accounts.

The IRS also notes that if taxpayers had paid only part of their tax liability and received a notice, they should follow instructions on the notice for remitting the amount due or exercise the option to create an installment plan.

So how did this all come about? It appears that at least part of the problem could be that the payment and the return are not associated with each other when the payment is not made electronically and is made before the joint return is filed. The timing issue is more problematic when payments are made by the non-filing (secondary) spouse before the primary taxpayer files the joint return.

While the best advice for this scenario is watchful waiting, it is generally not a good idea to ignore any kind of notice from the IRS. CP14 notices are a standard tool of the IRS that provides detailed notice to taxpayers of delinquent taxes and includes the date on which they are due to avoid penalty. Ignoring any notice from the IRS is never a good idea—even when it is the IRS that has made the mistake.

Contacted by the IRS about a foreign bank account or potential tax litigation?

Representing local, national, and international clients from offices in Chicago and Cleveland, the tax attorneys at Robert J. Fedor, Esq., LLC can answer your questions about the IRS and provide strong representation on matters of criminal tax defense, FBAR issues, and other tax controversies. Call 800-579-0997 or contact us today.