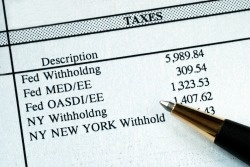 It is not uncommon for businesses struggling to pay their bills to fall behind on their payroll tax payments. Falling behind can create an array of financial and legal problems, however.

In some situations, there are people who decide that they and their enterprises will be better off by diverting funds from the Internal Revenue Service, however – a scenario that carries with it a wide array of other legal problems, including the possibility of criminal charges.

A willful failure to meet payroll tax obligations resulted in not only criminal charges against one Ohio businessman, but a prison sentence of a year and a day as well. The Columbus man has also been ordered to pay more than $1,500,000 in restitution to the IRS.

According to the agency, one of the man’s construction development management firms withheld employment taxes from employees but did not turn those funds over to the IRS. It is no coincidence that the amount he must pay in restitution matches exactly the amount the IRS says he owes in unpaid employment taxes.

A Cincinnati man was hit by a court with an even harsher sentence: 66 months in federal prison. The man pleaded guilty to two counts of willfully failing to collect or pay the owed employment taxes. He also pled guilty to employing unauthorized aliens.

In general, those employees who were undocumented immigrants and in the country illegally were paid in cash, the IRS notes. His restitution bill comes to $1,127,233.

For business owners who have been contacted by the IRS about unpaid payroll taxes, a conversation with an attorney experienced in these matters can begin the resolution process, which might involve offers in compromise or a payment schedule. Contact a Cleveland or Chicago criminal tax attorney for help today.