Refunds to taxpayers hit unfairly by IRS in forfeiture cases? 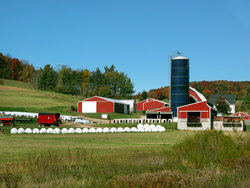 The couple has run a dairy farm for more than three decades, but they have been treated as if they are money-laundering criminals by the Internal Revenue Service. The injustice done to them by tax collectors who seized the couple's bank account is so clear that it unites Democrats and Republicans on Capitol Hill.

Lawmakers from both parties recently asked the Treasury Department to return all of the dairy farmers' money to them. The couple settled for $29,500 after their $67,000 account was seized in 2012. The bipartisan group of House Ways and Means members is asking for more from the Treasury Department and IRS: don't treat small business owners who unknowingly run afoul of banking laws as criminals.

The couple's dairy farm is about 300 miles southeast of Cleveland in Middletown, Maryland. The Hill reports that the civil forfeiture laws were designed to ensnare terrorists, people engaged in banking crimes or money laundering.

The banking law the dairy farmers violated states that each time you deposit $10,000 or more in a bank account, you must file a form with the IRS. The law also states that people can't make deposits of just under $10,000 to deliberately avoid the reporting requirement. The farmers repeatedly made deposits of just under $10,000 in order to avoid paperwork, unaware that to do so is a crime.

The IRS engages in this kind of intimidating behavior on a regular basis. The farmers felt they had little choice but to settle because, after all, their bank account had been seized.

An option worth considering if you feel the IRS leaves you little choice in a tax controversy is to discuss your options with an attorney experienced in cases involving audits, forfeiture and criminal tax investigations. The best decisions are typically informed, considered decisions.