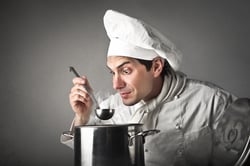 We all know the classic Seinfeld character the Soup Nazi for his agressive soup rules and his catch phrase, "No soup for you!" But, did you know he was based on a real person and soup shop in NYC? The owner, Al Yeganeh, became an unwilling star after his likeness was made famous. And while he doesn't like his nickname so much, it allowed him to grow his business and develop a retail product line under the name Soupman. As his business grew, he brought in a management team, including a Chief Financial Officer, who apparently doesn't feel as strongly about rules as his CEO. The CFO is being charged with 20 counts of tax evasion.

Here are the details from a New York Times article:

Federal prosecutors have accused Robert Bertrand, Soupman’s chief financial officer, of avoiding hundreds of thousands of dollars in tax payments — including Social Security, Medicare and federal income — by paying employees off the books.

At an arraignment on Tuesday, Mr. Bertrand pleaded not guilty and was released on $50,000 bail, according to the United States attorney’s office for the Eastern District of New York.

According to the indictment, Mr. Bertrand made payments to Soupman employees in cash and stock assets, and did not report them properly, even after he acknowledged the objections of an external accountant. The off-the-books payments totaled $2.85 million, costing the United States about $594,000 in lost taxes from 2010 to 2014, prosecutors said.

The interval encompasses 20 filing periods, which is why Mr. Bertrand is charged with 20 felony counts of tax evasion. If convicted, he could be sentenced to five years in prison.

“As alleged, the United States was fleeced out of more than half a million dollars through the defendant’s corporate misdeeds,” Bridget M. Rohde, acting United States attorney for the Eastern District of New York, said in a news release on Tuesday. “Tax crimes like those alleged in the indictment hurt every American citizen.”

James D. Robnett, a special agent in charge at the Internal Revenue Service’s criminal division in New York, said that in addition to hurting the government, such evasion would also result “in the loss of future Social Security and Medicare benefits for the employees of Soupman Inc.”

Failure to pay employment taxes can result in major charges from the IRS. Business owners that need to discuss the details of their circumstances with a tax law firm experienced in resolution of delinquent payroll taxes can trust Robert J. Fedor, Esq., L.L.C. with tax attorneys in Chicago and Cleveland offices. Our IRS tax lawyers can answer your questions and take actions to protect you and your business from criminal charges.