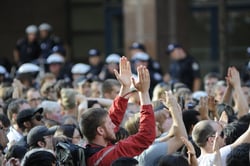 One of the many things that makes the U.S. a great nation is that we have the freedom to express our opinions, even when those opinions run counter to official government policy. For instance, people are free to argue that the federal income tax is illegal and that it violates several amendments of the Constitution.

People are free to make the argument, but they are not free to refuse to pay the income tax they owe. Because some of those who argue that the income tax is illegal, immoral and unconstitutional are articulate and persuasive, sometimes people give in to temptation and file returns making "unreasonable and outlandish claims," the IRS says, "to avoid paying the taxes they owe."

When you file that return, trouble can begin. No matter how reasonable the argument sounded in the book you read or website you visited, the IRS has very likely heard the argument before, taken it to court and prevailed. In fact, penalties levied against those who take up the court's time with "frivolous arguments" are getting harsher.

You can argue that only employees of the federal government are subject to the income tax, or that filing a return is voluntary or that Federal Reserve notes are not income -- the anti-tax arguments go on and on -- but at the end of the day, you must send in an accurate income tax return.

If you recently filed a return with "outlandish claims" in order to avoid paying taxes, the time to speak with an experienced Cleveland tax attorney is now, before the IRS contacts you about tax fraud. Speak with the lawyer so that you understand your best available legal options and then have your attorney begin the process of resolving the issue. Do not try to handle and accusation about fraudulent tax returns yourself.