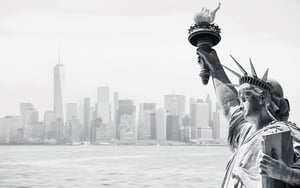 Housing for the homeless in New York City is a complex issue that involves many agencies and organizations.  Federal prosecutors are examining whether one Manhattan business group was more interested in tax fraud than providing safe, subsidized housing.

Jay and Stuart Podolsky are longtime owners and operators of commercial hotels in New York.  They are also convicted felons.  In the 1980’s, the two brothers were arrested and convicted of using tactics to force tenants from their apartments.  When the renters left the properties after suffering harassment, vandalism, or other ill treatment, the brothers could flip the property and rent or renovate for higher prices.

For the effort, the brothers were sentenced to five years of probation and community service for coercion and grand larceny.

Amsterdam Hospitality Group is the company run by the brothers.  In order for New York City to offer affordable housing for low-income individuals and families, the City pays millions of dollars to businesses to provide housing in existing structures—instead of the City building new dwellings.  The City contracts with Amsterdam Hospitality Group, and other similar businesses.

Recently, media reports suggest a potential IRS criminal investigation into shell companies secretly run by the Podolsky brothers.  Why the secrecy?  Allegedly, the brothers may have been running an elaborate tax fraud, overbilling for work performed by subcontractors and keeping the overage paid by the City.  It is possible, in addition to diverting funds into shell accounts, that the brothers have also committed tax fraud, by failing to pay taxes on the ill-gotten gains.

Growing concern about possible tax fraud led Mayor Bill de Blasio to halt negotiations with the Podolsky‘s in mid-January for the purchase of 17 of the apartment buildings. The deal was part of a larger initiative by the City to purchase 729 apartment units to bring them under City control.

For business owners and operators who learn of a potential or pending IRS criminal tax investigation, the smart next step is to speak with an experienced IRS tax lawyer.

With offices in Cleveland and Chicago, the tax attorneys at the law firm of Robert J. Fedor Esq., LLC help you understand your options and deliver aggressive representation if you are notified of a criminal tax audit or other tax matter.  Whether you face a personal or corporate tax challenge, we can help.  Call us at 800.579.0997 or contact us today.