Tax Havens: The Good, the Bad, and the Economy 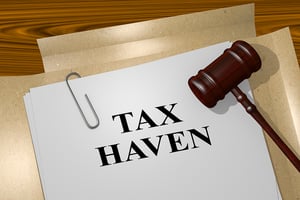 Offshore tax havens project the allure of anonymity, exotic locales, and money—lots and lots of money. The real-time picture is different and draws its lines between those seeking a solid investment process and economy-trashing tax evasion.

The purest view of offshore investment is one that provides legal tax advantages that legitimately cannot be obtained on home soil. Companies who locate headquarters in the region of a tax haven can oftentimes dramatically reduce their tax liability. Wealthy individuals, families, and foundations with a desire for privacy, wealth protection, and asset growth are great candidates for a tax haven strategy. The same goes for any company, startup, or individual looking to expand their interests and do so in a fairly anonymous way.

Overall, a solid tax haven provides security for funds (that may otherwise be unstable in a home jurisdiction), ownership privacy, and little to no taxation.

The opaque nature of tax havens and the use of foreign bank accounts is a draw for those seeking a discreet place to park funds for the short or long term. Yet, that opacity leads to disturbing practices by which the offshore world is more predominantly known today.

The most popular tax havens got that way through competition with other jurisdictions to provide the best service and lowest taxes to multinational companies and basically any entity with wealth. As a tax haven, countries without a more remarkable means of support can become a magnet for international investment and financial and business exchange. Tax havens are often a win for investors and the community that grows up around servicing those investments.

But the opacity of those regional jurisdictions also muddies the view, giving a darker and well-earned reputation that tax havens carry today.

Tax havens are an important playing piece in the global game of tax evasion. According to a 2019 report from the International Monetary Fund (IMF), tax havens defer between $500 and $600 billion from legitimate governmental coffers. The loss of tax revenue starves economies of money needed to serve citizens and grow and maintain stable infrastructure. Taxpayers, legitimate tax-paying businesses, and economies around the world are suffering increased damage from this long-term practice. As well, tax havens, shell companies, and tax evasion are commonly used by terror organizations to fund operations around the world.

For existing tax havens, like Ireland and some states in the U.S., reducing tax rates attracts business—but at a cost to neighboring regions and other countries. According to the Tax Justice Network, the top ten secrecy jurisdictions involved in tax evasion in the world include the British Virgin Islands, the Cayman Islands, Bermuda, the Netherlands, Switzerland, Hong Kong, Jersey, Singapore, and the United Arab Emirates.

This summer, 131 countries signed on to an initiative that disrupts the way large multinational companies are taxed. Multinationals typically take advantage of countries with ultra-low tax rates to minimize or eliminate taxes owed in countries where they do business. The new initiative, which will take some time to approve in member countries, includes a measure to impose a global minimum tax on untaxed foreign income.

Tax havens have quickly risen as a global economic problem. Interested investors are wise to speak with an experienced tax attorney to understand compliance and other issues around offshore banking. Effective measures to address tax evasion are only in their infancy—more to follow.

The legal group at Robert J. Fedor, Esq., LLC provide strategic solutions to complicated tax problems for businesses and individual clients around the world. When you need focused compliance advice or if you receive correspondence from the IRS—contact us or call 800-579-0997.