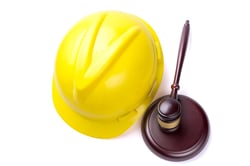 A husband and wife, Michael Taylor, 48, and his wife, Jeanette, 44, who own a construction business in West Virginia are each facing two years of jail time for failing to pay employment taxes. They withheld over one million dollars, which they used to buy property and run their horse farm. They've learned the hard way, the IRS isn't horsing around. Here are the details according to the Department of Justice report:

According to documents filed with the court, from 2000 through 2010, the Taylors owned and operated a construction business in Wayne, West Virginia, that transported steel and sold gravel and concrete throughout West Virginia and Kentucky. The Taylors changed the name of the business several times, though the operations of the business remained the same.

Both were responsible for collecting, accounting for, and paying over to the Internal Revenue Service (IRS) federal income taxes and social security and Medicare taxes that were withheld from the wages of their employees. From July 2007 through 2010, the Taylors withheld over $850,000 from their employees’ paychecks. Instead of paying over the withheld employment taxes to the IRS, the Taylors used the funds to purchase property and finance their horse farm. The Taylors also failed to pay over $490,000 in employment taxes for their prior business. The total tax loss for the Taylors’ conduct is $1.4 million.

In the event you are approached by an IRS agent inquiring about the withholding of employee taxes, failure to file, or about any other aspect of taxation of your business, you should speak with an experienced criminal tax lawyer at Robert J. Fedor Esq., LLC. In that way, your rights will be protected and you can begin the process of resolving outstanding income tax problems with the IRS.