Who Is Liable for Payroll Tax Violations? 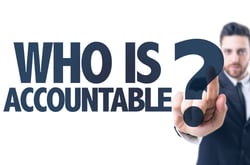 Failing to pay payroll taxes is serious. The Internal Revenue Service (IRS) does not take these matters lightly. In some cases, penalties for such violations can result in personal liability for those who are deemed responsible for paying these taxes. If the allegations are successful, the IRS can hold the person accused of failing to pay these taxes accountable for 100 percent of the missed payment.

How does the IRS build a case for a failure to pay payroll taxes?

Essentially, there are two main factors that the agency must establish to build a successful claim. The first is that the accused is responsible and the second that the failure was willful.

The definition of a “responsible party” for these purposes is fairly broad. It does not just include those who are directly responsible for making payroll tax payments but extends to include anyone who “has a duty to perform and the power to direct the collecting, accounting, and payment of trust fund taxes.”

Liability for these taxes also requires a finding that the failure to pay was willful or reckless. It is important to note that this requirement is also interpreted broadly. The failure does not need to be intentional to meet this requirement. The fact that a qualifying individual is aware of the failure is often enough.

Seem harsh? It certainly can be. This broad scope can result in allegations against those who were unaware of a failure to make payroll tax payments. A piece in Accounting Web discusses a recent case that provides some clarification on how these factors are interpreted.

In this case, the president and CEO of a company were accused of failing to make payroll taxes. Since both had the ability to hire and fire employees and control the company’s bank accounts, the IRS build a case to accuse them of personal liability for failing to make payroll taxes. In theory, it sounds like these individuals could qualify for the above definition of those that are responsible for payroll taxes. In reality, they had hired a controller to take charge of these taxes as well as an accounting firm to run audits and complete income tax returns.

The business began to struggle financially. The accounting firm issued a clean audit but later noted the controller had overstated the business’ receivables and failed to pay payroll taxes. This led the business to bankruptcy.

The IRS accused both the president and CEO of failing to file payroll taxes and issued a trust fund penalty. The lower court agreed with the IRS’ above reasoning, finding in favor of the agency. On appeal, the penalty was overturned. The appellate court noted that the owners did not meet the definition of a willful or reckless failure to pay, likely due to the fact that they had “no actual knowledge” of the failure to pay.

What can I do to protect against tax liability?