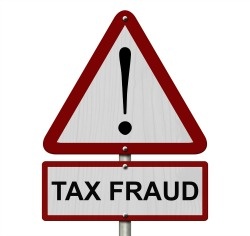 The Internal Revenue Service claims that about 1 out of every 6 taxpayers fails in one way or another to comply with the tax code. If the federal agency’s estimate is accurate, you might reasonably expect the numbers of tax-related arrests to be significantly higher than they are now.

The reason why not every sixth person you know is facing criminal charges is because the IRS distinguishes between income tax fraud and negligence.

Tax fraud is a deliberate attempt to evade taxes or to defraud the IRS. Tax fraud takes place when a person or company willfully does one of the following:

People Make Mistakes
It goes without saying that the tax codes are long and dense and sometimes nearly indecipherable — even for accountants paid to make sense of them. In that regard, the IRS acknowledges that sometimes mistakes happen and people will assume A about the code when B actually applies.

Without evidence of fraud or other criminal activity, the IRS will typically assume you have made an honest mistake on your returns. That’s about the extent of the agency’s willingness to forgive, however, as even unintentional mistakes can result in a 20 percent penalty to the taxpayer.

There are certainly circumstances in which the IRS assumes an unintentional error is actually a deliberate attempt to defraud. In these situations, the taxpayer can face serious consequences, including prison time.

Many will turn then to experienced tax law attorneys to help them resolve disputes with the IRS. In some cases, negotiations can lead to resolution of the issue without any criminal charges; in other cases, vigorous representation in court is required.