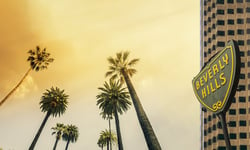 A Beverly Hills resident was recently indicted by a federal grand jury for a slew of tax violations, including corruptly endeavoring to impede the internal revenue laws, filing false tax returns, claiming exemptions he did not qualify for, and filing false FBARs.

The Department of Justice press release gives us the details:

The indictment charges that from 2006 through 2014, Teymour Khoubian impeded the administration of the internal revenue laws. According to the indictment, Khoubian filed false individual tax returns with the Internal Revenue Service (IRS) for tax years 2005 through 2010 that did not report his financial interest in multiple Israeli and German bank accounts or the interest income that he earned from those accounts. He also allegedly falsely claimed refundable tax credits to which he was not entitled, including the Earned Income Tax Credit, which is intended for low-to moderate-income working individuals. In 2008, Khoubian is alleged to have held approximately $20 million in assets in his undisclosed accounts. The indictment charges that Khoubian also filed a false 2011 tax return that underreported the interest income he earned from his Israeli accounts and continued to fail to disclose that he held an account in Germany. Khoubian is also alleged to have filed false 2012 and 2013 Reports of Foreign Bank and Financial Accounts forms (FBARs) with the U.S. Department of Treasury that concealed his German account. U.S. citizens, resident aliens, and permanent legal residents with a foreign financial interest in or signatory authority over a foreign financial account worth more than $10,000 are required to file an FBAR disclosing the account.

In addition to filing false tax returns and FBARs, Khoubian allegedly provided his German bank with a copy of his Iranian passport and a residential address located in Israel to prevent the bank from disclosing the account to the IRS. He also allegedly sent a letter to Bank Leumi falsely claiming he was living in Iran when, in fact, he resided in Beverly Hills, California.

Khoubian is also charged with making false statements to an IRS Criminal Investigation (CI) special agent – denying that he owned an account in Germany between 2005 and 2010, stating that the German account was closed, when it was in fact still open, and stating that the funds had been transferred to the United States, when Khoubian had allegedly transferred over $600,000 from his German account to his accounts in Israel.

Taxpayers in the U.S. and in foreign nations must take their offshore tax issues and filing obligations seriously. The IRS has made compliance with foreign asset reporting requirements a top priority.

For those who have yet to return to compliance, a confidential conversation with a tax law attorney experienced in offshore taxes and resolving FBAR-related concerns, like Robert J. Fedor Esq., LLC, can begin the process of securing a non-prosecution agreement and filing required documents.