Could Happen to Anyone—Former IRS Employee Charged with Tax Fraud 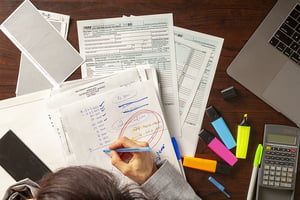 For some, the temptation to file a false tax return is too great to resist. After that, tax evasion can snowball. For one taxpayer, who was also employed by the IRS, the outcome could be prison.

While it may be hard to convince yourself, intentionally filling in the wrong data and filing a fraudulent tax return can really end up with allegations of tax crime and time in prison. Wayne Garvin, now of South Carolina, was for a number of a years a Supervisory Associate Advocate with the Internal Revenue Service in Philadelphia.

During an IRS civil audit of his 2013 and 2014 tax returns, Mr. Garvin provided auditors with false documentation to support the audit. The dummied-up documents were a church receipt for a donation, an invoice, and a letter from the US Army related to reservist duty. The aim of the documents was to support the deductions and expenses that Mr. Garvin had taken on the returns. The falsified documents then led to an IRS criminal tax investigation of false claims made by Mr. Garvin on returns filed between 2012 and 2016. When notified of the turn of the civil audit into a criminal tax matter, Mr. Garvin submitted the same falsified documents he had supplied earlier in the audit. During this time Mr. Garvin was employed by the IRS.

This cautionary tale is worth noting because an individual with sophisticated knowledge, insight, and employment in the aims and methods of the IRS chose to try and game the system. If not before, once the investigation turned toward tax crime, Mr. Garvin should readily have known he would not be able to evade the due taxes and potential penalty for filing false income tax returns. Had Mr. Garvin quickly sought the advice of a criminal tax defense attorney when the civil audit transitioned to a criminal audit, the matter may have been rapidly resolved without prosecution or potential incarceration.

Yet—as happens so often, Mr. Garvin continued to push the lie. He was indicted in October of this year on three counts of tax evasion and two counts of impeding IRS regulations. He faces five years each on each count of tax evasion and a maximum three years on each account of interfering with the IRS.

While it is hard to guess at the motivations of another, the payoff on this gambit by Mr. Garvin appears to be a whim compared to the consequences he may face. Beyond that? His story offers diamond clarity on the fact that anyone can cross a line and quickly get in deeper than they ever imagined. The best time to address a potentially falsified tax return is before the IRS contacts you. And if they do? Speak with a seasoned tax attorney as soon as possible to avoid an outcome like Mr. Garvin.

Do you need criminal tax defense? Out tax lawyers can help

If contacted by the IRS, get experienced legal advice right away. With offices in Cleveland and Chicago, the legal team at Robert J. Fedor, Esq., LLC offers help with tax controversy, criminal tax matters, offshore tax issues, and guidance with business bankruptcy. Contact us today or call 800-579-0997.