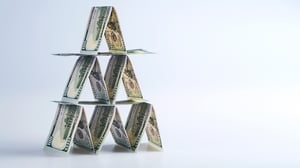 A Ponzi scheme is the basis for the number nine entry on the IRS:CI top ten tax investigations for 2021.

A Ponzi scheme is an old type of investment fraud that involves paying investors already in the pipeline with proceeds from new investors who are suckered into the program. Instead of investing funds deposited by investors, the proceeds usually provide a luxe lifestyle for fraudsters while returning some profit to initial investors. When incoming investments lag, or investors wise up and try to withdraw their money, the scam collapses.

Although he did not invent it, the scam is named for an Italian con artist, Carlo Ponzi. An impressive business failure, Mr. Ponzi nonetheless scammed investors and financial institutions of Boston during 1920, causing investors to lose approximately $20 million (about $200 million by current standards) when the scheme collapsed. By comparison, Bernie Madoff, the most notorious swindler in recent history, lifted $18 billion from his investors (according to Wikipedia, a sum that was about 53 times the heft of Mr. Ponzi’s swindle).

In the present case, 38-year-old John Piccareto Jr, a New York man, took a job with Lucian Development in 2012. Lucian was a company owned and run by Perry Santillo and Christopher Parris. Lucian Development was a classic Ponzi operation—selling fake promissory notes. Money coming from new investors was used to keep earlier investors happy. Mr. Piccareto was not initially aware the business was a scam. When he figured it out, he signed on in a big way, soliciting new investors and bringing in almost $600,000.

According to the IRS, Mr. Piccareto was involved in the take between January 2017 and June 2018. In that time, he was involved in bilking an estimated 400 investors of about $18 million. As is the habit of most individuals engaged in tax fraud, Mr. Piccareto filed a false income tax returns that claimed $6,576 in taxable income. He failed to mention that his income that year was just about $538,548.

Mr. Piccareto will spend seven years in prison considering his actions. Both Mr. Santillo and Mr. Parris were each sentenced to 210 months (17.5 years) in prison. Together, they swindled more than 1,000 people of over $100 million. Ponzi schemes and filing fraudulent tax returns are nothing new—and people who engage in big-time capers are likely to catch the prosecutorial eye of the IRS.

The tax group at Robert J. Fedor, Esq., LLC represents business and individual clients responding to civil or IRS tax audit, offshore tax allegations, or employment tax disputes. When strategic tax advice and strong representation is needed locally or internationally, call 800-579-0997 or contact us for a free consultation. We have offices in Cleveland and Chicago.