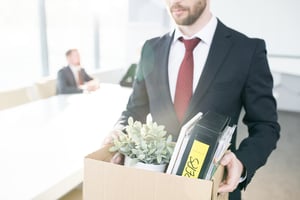 After a series of scandals, about 80 former and current employees of Deutsche Bank AG are being investigated by German prosecutors for tax fraud. Prosecutors have been looking into the activities of some of the biggest players in European and US finance for several years. As a result, Deutsche Bank’s stock has lost three quarters of its value in the last seven years.

In July, Christian Sewing, the recently appointed CEO of Deutsche Bank, unveiled the largest restructuring in the bank’s history. The restructuring includes eliminating 18,000 jobs (20% of the workforce). Essentially, the bank will no longer be involved in equities trading. The bank also reshuffled its top management.

Though Supervisory Board Chairman Paul Achleitner’s term does not expire until 2022, he is focused on finding a successor after shareholders criticized the company’s lack of succession planning. Just before Achleitner became chair of the Supervisory Board in 2012, Deutsche Bank had expanded its investment banking business and, in the process, became involved in many misconduct cases and scandals, including:

The bank was required to pay billions of dollars in fines. As chairman, Achleitner shook up the Supervisory Board and strengthened oversight. Last month, the supervisory board fired three of the bank’s nine management board members, including those overseeing the investment bank, the retail bank, and the regulatory chief.

As part of this clean up effort, Stefan Simon was moved from the supervisory board to the bank’s management board and became the bank’s new regulatory chief. Mr. Simon is an attorney who has extensive experience working with regulators and courts. After all the scandals and on-going investigations, he will have an uphill battle to restore the bank’s reputation.

Involvement in Tax Fraud Schemes is Not Always Apparent

Many of the investors involved in the Deutsche Bank’s scandals may not have been aware that they were involved in tax fraud. Before investing in something that seems too good to be true, consult with a reputable tax lawyer. An experienced tax attorney can help avoid inadvertent involvement in tax fraud.

With offices in Chicago and Cleveland, the law firm of Robert J. Fedor Esq. LLC helps clients across the nation and globally.  Our attorneys can help ensure you are not a victim of (or complicit with) tax fraud and other tax evasion schemes. To learn more or to schedule a free consultation, call 800-579-0997 or contact us online.