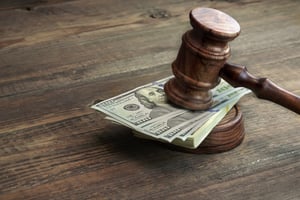 A Paradise Valley, Arizona man took a familiar tax scam and made it his. His story is a cautionary tale on a couple of levels.

John Propstra is going to prison for almost two years.  After that, the 47-year old man will be on probation for another three years and he will be paying restitution to the tune of $700,000 to the Internal Revenue Service (IRS) for a lot longer than that.

Let’s just say up front that his career and personal life is probably in shambles.  When he next has the liberty to decide what he is going to do with his life, he will be a convicted felon, which makes life harder in a number of ways.

How did a man who owned several small businesses and provided outsourced payroll services get in this position?  There is a clue in the previous sentence, and it is “payroll services.”  Mr. Propstra was in the business of collecting federal employment taxes for other companies and paid them to the IRS—until he didn’t.

Anyone who reads much of this blog will know we touch on different types of tax crime and controversy.  Payroll tax issues are one of our practice areas, as are employment tax disputes.  In the process of his business dealings, Mr. Propstra slid down the slippery slope of withholding taxes he was being paid to withhold for the IRS.

While it seems a straightforward scam, this tax fraud usually involves multiple charges.  As the subject of an IRS criminal tax investigation, Mr. Propstra faced numerous allegations.  In addition to failing to pay over the monies he collected from his client companies, Mr. Propstra filed false income tax returns stating he paid more taxes than he had.  Then he quit filing employment tax returns altogether and disposed of filing accurate wage reports to the Social Security Administration (SSA).  For his own group of small businesses, Mr. Propstra failed to pay over $710,819.05.

Business owners who make a habit of dipping into withholding taxes are taking a risk.  Owners who are in the business of collecting employment taxes and fail to pay over the money to the IRS are making a blatant misjudgment.

Despite the similarity of charges faced by defendants, no two tax crimes are ever truly the same.  Had Mr. Propstra consulted with a tax attorney with experience in defense of criminal tax matters prior to his arrest, some of the consequences of this crime might have been mitigated.  We’ll never know.

Speak with a trusted tax lawyer in Cleveland and Chicago

Serving clients nationwide and abroad from offices in Cleveland and Chicago, the law firm of Robert J. Fedor Esq., LLC offers experienced guidance to resolve criminal allegations or tax litigation with the IRS.  Do not let your future slip away. Seek skilled legal counsel. Contact us or call 800-579-0997 today.