Former IRS Revenue Officer Busted for Tax Fraud of His Own 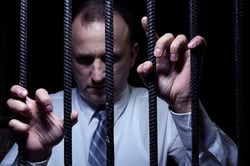 A North Carolina man has been sentenced to 43 months of prison time for tax evasion. Oddly enough, this gentleman ran a tax consultancy business for the last 24 years, and that was after 12 years of being employed as an IRS Revenue Officer. He used the knowledge he gained working for the IRS to conceal his own tax fraud. He also submitted all of his clients' taxes under a false identity. The long arm of the IRS has now reached out and grabbed one of its own.

Read the full details from the US Department of Justice press release:

According to documents filed with the court, from 1989 through 2014, Henti Lucian Baird operated HL Baird’s Tax Consultants. Baird had previously worked as an IRS revenue officer for 12 years. Although Baird filed tax returns every year, he has not paid taxes since at least 1998. He used his knowledge and experience as a revenue officer to evade paying his own taxes. He hid hundreds of thousands of dollars that he earned from his consulting business in bank accounts that he created in the names of his children and used money orders and cashier’s checks to pay his personal expenses. In response to IRS collection efforts, he submitted a false collection form on which he claimed to have only one bank account and concealed the existence of his nominee accounts. When Baird learned that the IRS had become aware of these accounts and intended to levy them, he withdrew the funds before the IRS could seize them. To stall impending liens and levies and evade paying the taxes he owed, Baird filed, in bad faith, a cash offer in compromise to settle his tax debt, a request to discharge the levies on the nominee accounts and an application to subordinate his federal tax lien. During this time when Baird was refusing to pay over to the IRS the taxes he duly owed, Baird continued to pay the mortgage on his 4,300 square-foot home, annual fees for his timeshare in Florida and car payments on his BMW.

Baird also corruptly endeavored to impede the internal revenue laws by using his stepson’s identity, without his knowledge, to apply for a Preparer Tax Identification Number that Baird used to file over 900 tax returns for clients, as well as his own tax returns. Baird advertised himself to clients as specializing in “IRS problems, delinquent returns, offer-in-compromise, tax problems, delinquent employee taxes and release of liens and levies,” and submitted at least 120 power of attorney forms to the IRS on behalf of clients falsely claiming to be an enrolled agent, even though the IRS revoked his authorization to represent taxpayers in 2009.

“For well over a decade, Lucian Baird abused his prior experience with the IRS to evade paying the taxes he owed and stymie the IRS’s collection efforts, while spending the government’s money on personal luxuries,” said Acting Deputy Assistant Attorney General Goldberg. “Everyone is required to pay their fair share, and those, like Lucian Baird, who make every effort to dodge their legal obligation to pay what they owe, will face significant consequences including jail and monetary penalties.”

“Henti Lucian Baird engaged in an elaborate scheme to hide assets in nominee accounts for the sole purpose of evading the payment of taxes owed to the federal government,” said Acting U. S. Attorney Hairston. “Through the tireless efforts of dedicated prosecutors from the Tax Division and the United States Attorney’s Office, and special agents from the IRS, Baird has been brought to justice for his crimes.”

“The criminal actions of Henti Lucian Baird not only cheated the Treasury Department and law-abiding citizens with his tax evasion efforts, he took advantage of family members to perpetrate additional fraud,” said Chief Richard Weber of IRS Criminal Investigation. “This sentence should send a clear message; It doesn’t matter who you are or where you worked, IRS Criminal Investigation, along with their law enforcement counterparts, will work diligently to uncover fraudulent tax schemes and bring you to justice.”

In addition to the term of prison imposed, Baird was ordered to serve one year of supervised release and to pay $573,422.74 in restitution to the IRS. Baird pleaded guilty in October 2016.

The lawyers at Robert J. Fedor, Esq., L.L.C., are well-versed in the IRS offer in compromise program, and spend the necessary time with clients to educate them on the process. Having this knowledge and experience on your side can make a difference in whether an offer in compromise is accepted.

To discuss whether you qualify as a candidate for the offer in compromise program, contact Robert J. Fedor, Esq., L.L.C., at 800-579-0997, or email our firm. We invite you to arrange a phone consultation or a meeting at our offices in Cleveland, Ohio, or Chicago, Illinois.