Got a Letter From the IRS on Your FBAR? You’re Not Alone 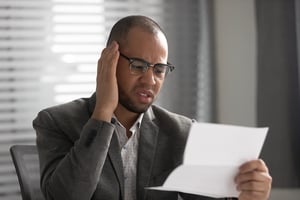 One form of tax relief could lead to another form of tax enforcement. If you have recently received a letter from the Internal Revenue Service (IRS), it would pay not to ignore it.

At any time, the IRS conducts a series of compliance campaigns. Large Business and International Active Campaigns (LB&I) are focused initiatives aimed at education, deterring tax fraud, and making good use of the very limited budget of the IRS. One of those campaigns is the Post Offshore Voluntary Disclosure Program (OVDP) Compliance.

Now closed, the OVDP was a voluntary amnesty program that allowed taxpayers to report previously unidentified offshore tax assets to the IRS. The program gave taxpayers the means to avoid civil or criminal charges of tax crime and provided revenue to the IRS. In operation from 2009 to 2018, the IRS reported approximately 56,000 taxpayers made use of the OVDP to get in the clear with the agency.

In 2019, the IRS announced its Post OVDP compliance program. The program is aimed at those thousands of taxpayers who originally used the OVDP and may not have maintained compliance since then through required regulatory filings like the Report of Foreign Bank and Financial Accounts (FBAR).

According to an article in The National Law Review, the IRS has this to say in the letters:

There are two avenues of response if you are a recipient of a soft letter from the IRS. If you are compliant, provide a letter stating as much along with back-up, or full explanation of attempts made to become compliant and why those efforts failed.

If you are in arrears, you can file your amended, but delinquent reports, which will trigger the standard penalties unless you can provide some reasonable cause for the tardiness of your reports.

When responding to the IRS, talk with a tax attorney first. Whichever option you choose, a response is needed. A tax professional can help you understand what is needed and craft an appropriate response that could avoid continued interest from the IRS down the road.

Stay on the right side of tax compliance, speak with our legal team today

With offices in Cleveland and Chicago, the legal team at Robert J. Fedor, Esq., LLC answers tax questions and provides experienced representation during civil or criminal IRS tax audits or tax litigation. When you need skilled tax advice locally or abroad, call 800-579-0997 or contact us.