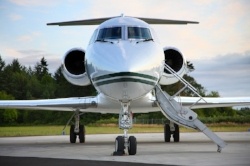 A Florida man will be cooling his heels in prison for more than seven years after conviction on an impressive assortment of criminal tax charges involving chartered aircraft.

The headline in the Miami Herald reads, “If you steal $1.5 million, the IRS still wants you to report that as income.”

As noted in the newspaper account, the story begins with the hire of Mr. Timothy Beverley by Majestic Jet, a Pompano Beach aviation business.  At the time of his employment by the company, Mr. Beverley was on probation from an earlier stint in prison for fraud.

The earlier conviction resulted from a money laundering scheme whereby Mr. Beverley and a co-defendant defrauded banks and businesses by obtaining loans to repair aircraft, and then partially diverted funds for their personal use.  For Mr. Beverley, that included ownership of a NASCAR team.  In addition to the prison time, Mr. Beverley was ordered to repay $18.2 million as restitution for his crime.  It is not clear if restitution was paid in the case.

During his employ, Mr. Beverley used that authority to steal $2.2 million from the company by way of directing escrow agents to wire monies from the sale of airplanes to bank accounts managed by the man himself.  He also paid his personal expenses directly from company accounts.

Running afoul of the IRS

If you have been the subject of an IRS criminal tax investigation and convicted, it is probably a good bet that you are never too far off the IRS radar.  In this case, Mr. Beverley was convicted by a jury for filing fraudulent tax returns that failed to disclose his stolen money, filing false monthly probation reports, and wire fraud.

For his trouble, Mr. Beverley is returning to prison for 90 months and has been ordered to pay $634,906 in restitution.  After that time, he will again be placed on probation for three years.

After his first gig in prison, Mr. Beverley went straight back to business practices of the kind that originally landed him there.  While prison did not deter him, most executives prefer to avoid loss of their liberty, destruction of personal and professional reputation, and generally ruinous financial fines and losses.

In this case, a high-flying confidence man is grounded, going back to prison at the age of 61. If you are notified of an IRS audit or have outstanding tax liabilities, an experienced tax attorney can help you find solutions that keep you out of an IRS criminal tax investigation—and prison.

From offices in Cleveland and Chicago, the skilled tax lawyers at Robert J. Fedor, Esq., LLC help you handle IRS tax challenges.  When you need confidential, responsive, legal advice locally or abroad, call 800-579-0997 or contact us.