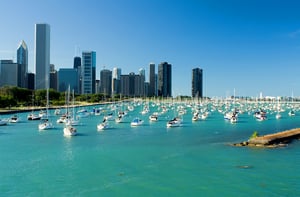 Illinois Governor J.B. Pritzker may yet face allegations of tax fraud for what the Chicago Sun Times has referred to as a “Game of Thrones.”

According to the Sun Times article, Governor Pritzker and his wife purchased property in the historic Gold Coat district along the Lake Michigan coastline in Chicago.  The area, reclaimed from swamp and the Great Chicago Fire of 1882, is a magnet for new and old wealth in the city.

The Governor owns a residence in the area, and also purchased the 126-year old mansion next door.  In 2015, the Governor removed all the toilets in the mansion approximately 10 days before the home was inspected for a property appraisal.

Following the removal of the toiletry, the Governor and his attorneys filed paperwork seeking to have the residence identified as “vacant and uninhabitable.”  As a result, the Office of the Assessor lowered the market value of the home from approximately $6.25 million to just over $1 million.

The drop in property value also dropped property taxes on the mansion. The governor’s wife and personal assistant also filed affidavits appealing tax assessments on the home for the years 2012 through 2014.  Apparently, the affiants claimed the mansion had been without working toilets since 2012.

Since then? Not much

The Governor has had a lot on his plate, and not much time to worry about toilets.  In June, Governor Pritzker signed his $40.1 billion budget into law, along with a new graduated income tax structure passed earlier by the Illinois General Assembly.

In April, news station WBEZ reported the Governor, his wife, and brother-in-law are the subject of a federal inquiry concerning the toilets—other than that, the potential impropriety has remained firmly in the water closet.

The outlet reported a criminal investigation is ongoing but that charges are not expected soon.

As early as October 2018, the response of the Governor to this this smelly subject has been that he would be willing to repay monies, along with following any recommendations made by investigators.  This low-key acknowledgement of potential payback and willingness to yield to future guidance by regulators is key to keeping his professional, and personal, agenda moving forward.

Good legal guidance on questions of tax crime can save a career or a corporation.  If challenged by an IRS audit—or the media—speak with a knowledgeable criminal tax attorney for strategic advice on your best next steps.