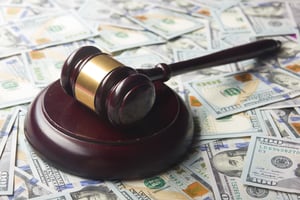 In the second largest penalty obtained by the Department of Justice, Israel’s sprawling Bank Hapoalim admitted to a systemic program whereby its officials and branches laundered money and actively helped US taxpayers set up offshore tax accounts to hide their cash. The cost to balance the slate? Close to a billion dollars.

But despite the size of the fine, let’s keep in mind the criminal tax charges filed against the bank and its Swiss subsidiaries documented $7.6 billion in cash stashed in unreported foreign bank accounts. Regulators put the number of hidden Swiss and Israeli bank accounts used to help clients evade taxes at about 5500.

In a regulatory document filed on the Tel Aviv Stock Exchange, the bank placed the total sum to be paid to settle the charges at closer to $904 million. The settlement monies are headed to the US Treasury, the Federal Reserve, and the New York State Department of Financial Services. Why New York? Because a number of US persons who took advantage of the illegal services offered by Bank Hapoalim were New York taxpayers.

The activities by which the bank aided its customers to avoid their taxes are not new. Big and small-name banks around the world have conducted themselves similarly. Some get caught, some do not. Recent litigation seems to indicate that the bigger the player, the more likely the fall. In the case of Bank Hapoalim, it engaged in a textbook primer of actions that tend to attract IRS criminal tax investigations including:

Undertaken between 2002 and about 2014, the conspiracy was business as usual—until it wasn’t. Some ploys are uncovered, some are not. Until we report on the next big one—talk to your accountant or your tax attorney to make sure your own reporting and your FBAR is up to date.

With offices in Chicago and Cleveland, the team at Robert J. Fedor, Esq., LLC helps clients respond to IRS audits, and allegations of offshore tax improprieties or tax crime. When you need experienced legal advice locally or abroad, call 800-579-0997 or contact us.