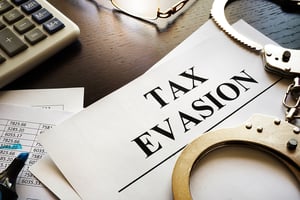 In a complicated scheme spanning years, a Kansas man used payday loan debt to make money and committed tax fraud along the way.

As criminal tax attorneys, we understand how business owners and operators make decisions that sometimes lead to problems with payroll taxes, fraudulent tax returns, and other concerns. That is our legal focus—to help clients move through tax troubles and get back to their lives and business interests.

The scenario involving the Kansas business man is interesting for its breadth and gambit of using the debt of others as a springboard into a tax controversy that will cost 51-year old Joel Tucker over $8 million and a possible 20 years in prison before eligible for parole. Under a plea agreement, Mr. Tucker pled guilty to one count each of bankruptcy fraud, interstate movement of stolen money, and tax evasion. Sounds pretty simple but the events that led up to that are anything but.

The story starts well enough. Mr. Tucker managed businesses that serviced payday loans. Payday loans are short-term, high-interest rate loans that provide the borrower quick cash, based on the premise that the loan will be paid back at the next payday. The businesses of Mr. Tucker did not make loans, but collected loan applications from borrowers which were sold to lenders who followed up on the application from there.

While the format and name of his co-owned company changed from time to time, Mr. Tucker was in the business from about 2009 until 2012 when he and his partners sold the company. So far so good.

While Mr. Tucker sold his slice of the business, he held on to the personal contact and loan data of 7.8 million consumers who had passed through his software platform looking for loans. Types of information he retained included social security numbers, bank accounts, dates of birth, addresses and more. From there Mr. Tucker did a couple of things that landed him in an IRS criminal investigation, including:

Overall, Mr. Tucker took in $7.8 million and, not surprisingly, failed to file tax returns from 2014 through 2016. The Justice Department press release reads, “This well-dressed thief victimized millions of Americans whose personal information was fraudulently sold to debt collectors,” Garrison said. “Some of those victims, in their fear and confusion, actually paid debts they didn’t owe. And by hiding his income and assets then lying about it to federal agents, he victimized every honest citizen who obeys the law and pays their income taxes. His thievery allowed him to enjoy a luxurious lifestyle for a short time, but he won’t be entitled to such luxuries in federal prison.”

This story, in one form or the other, repeats itself over and over. The bottom line is—these things happen. The best way to avoid losing your luxuries in prison is to speak with an experienced criminal tax lawyer as soon as you realize you are in too deep. We can help.

Knowledgeable tax defense if you face allegations of tax crime

The legal team at Robert J. Fedor, Esq., LLC delivers aggressive legal representation if you are involved in tax litigation or are questioned about tax irregularities or your foreign bank accounts. With offices in Chicago and Cleveland, we serve clients locally and abroad. Call 800-579-0997 or contact us today.