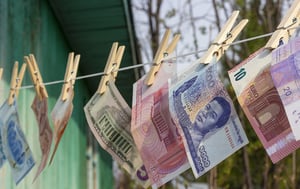 As the Executive Secretary of Paris-based Financial Action Task Force (FATF), David Lewis is a global leader in the effort against global corruption, schemes that fund terrorist organizations, and financial crime. He recently spoke with the International Consortium of Investigative Journalists (ICIJ) (the group that brought us the Panama Papers expose’ and continues to pull back the curtain on international monetary crime).

FATF is a non-profit organization that monitors terrorist financing and money laundering on the global stage. Recognizing that rampant graft and financial crime is as much a global concern as the bane of any one country, the group has developed standards to provide a coordinated international response to terrorism, corruption, and organized crime. Approximately 200 countries and jurisdictions recognize the standards promoted by the organization.

Reflecting on the status of local and national work against criminal tax matters, Mr. Lewis makes points including the following:

Mr. Lewis notes, “I would sum up the results as ‘everyone is doing badly, but some are doing less badly than others. There are signs of success in some countries and most now have the tools to do the job. We are seeing national efforts go in the right direction but there’s still a long way to go.”

Global efforts against money laundering have real-world impacts for countries and regions around the world, especially in a volatile and unsteady economy. If you have questions about strategic protection of wealth through legitimate use of a foreign bank account or offshore tax shelters, speak with an experienced a tax attorney for guidance.

With offices in Chicago and Cleveland, the legal team at Robert J. Fedor, Esq., LLC helps clients respond to IRS audits, and allegations of offshore tax improprieties or tax crime. When you need experienced legal advice locally or abroad, call 800-579-0997 or contact us.