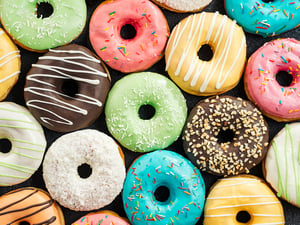 A New York couple and their son may serve prison time for doing more with their dough than make pastries to sell at their three donut shops.

In October 2020, a federal grand jury returned an indictment against John and Helen Zourdos and their son Dimitrios. The family lives in Rome, New York and were charged following an IRS criminal tax investigation that raised allegations of felony tax evasion, conspiracy to defraud the IRS, and filing false tax returns. The charges arise from their management of their three donut shops, two in Rome and one in New Hartford.

While the indictment was bad, the jury verdict was worse. Despite a considerable amount of evidence against them, the defendants took the matter to trial. The prosecution produced several former employees who provided testimony on business practices that included:

The donut business was good and the money the family kept off the books paid for lifestyle enhancements including travel and luxury vehicles.

The defendants were convicted of conspiracy to defraud, tax evasion, and filing fraudulent tax returns. John and Helen Zourdos provided incomplete and false information to their accountant, leading him to file inaccurate individual and corporate tax returns on their behalf.

In this instance, tax evasion was an established pattern for these small business owners, not a one-time deal. Cooked books, cash under the table, false tax returns, and eventually, allegations of criminal tax fraud and conviction. Sentencing is yet to be leveled in this case.

For any individual or business owner engaged in a tax scheme, or who knows they are walking a line with their employment taxes or falsified corporate or individual tax returns, talk to a trusted criminal tax defense attorney now. If you are caught, the consequences are more difficult to mitigate than if the matter is approached before the IRS is involved.

From offices in Chicago and Cleveland, the tax lawyers at Robert J. Fedor, Esq., LLC help individuals and corporations nationwide and abroad respond to allegations of tax crime, IRS audits, and other tax controversy. When you need responsive, legal advice, contact us or call 800-579-0997.