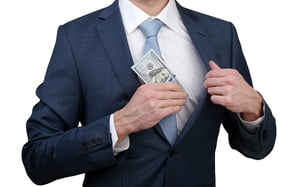 One thing to remember about committing a tax crime—it doesn’t always happen to someone else.

Take for example Kevin Fleming, a small businessman and skilled photographer with a claim to fame for working with National Geographic magazine. One look at his Facebook page and you will see his skills are on display.

Yet you can also take a look at a press release from the Department of Justice (DOJ) that describes a different sort of business owner. In November of last year, Mr. Fleming was indicted on criminal tax charges—five felony counts of tax evasion. The charges stem from a failure to file tax returns for several years. During that time he also diverted business income from his corporate business, Portfolio Books Inc., to pay personal expenses.

Our tax attorneys work routinely with business owners who moved money around in a way that might not have been wise, or as in this case, that should have been accounted for and reported to the IRS in an annual tax return. There are few who do not understand the requirement to file a tax return—but choices are made that sometimes become habit. In this case, tax returns for Mr. Fleming remained unfiled for 2012 through 2016. The dropout could easily have flagged Mr. Fleming for IRS review. Apparently, it grew into a criminal tax investigation.

In addition, Mr. Fleming operated a storefront for his photo products and books where he had a couple of employees. Between March of 2016 and September of 2017, Mr. Fleming continued to collect the employment taxes from his employees—but failed to pay them over to the IRS. This caused a little payroll tax issue of about $22,584 by the time the IRS decided to take action.

With payroll taxes, Mr. Fleming remains on the line for the money collected from his employees that he did not pay to fund programs on their behalf. While many people grumble about taxes taken from their paychecks, the money is counted toward social security and Medicare benefits they will use someday, including disability payments if accident or illness strikes. Failing to payover employment taxes takes money from the pockets of wage earners, as long as the fraud is undiscovered.

If you own or run a business and you are aware of tax or other financial shortfalls on your books—take a good look at some of the press releases on the DOJ website, and then look in the mirror. If this could be you—talk frankly with a tax lawyer experienced with criminal tax matters. Instead of a guilty plea and a possible five years in prison—you may get off a lot better than Mr. Fleming.