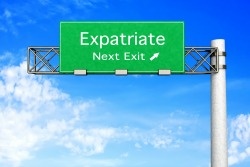 In the middle of heated presidential campaigns, people will sometimes vow to move out of the country if Candidate X or Candidate Y is elected. Most of these pledges are never carried out, but for those who are sincere about leaving the United States after this November’s election, there are tax implications to consider before you pack your bags.

Perhaps first on the list of tax consequences to ponder: you will still be required to file an annual tax return with the Internal Revenue Service. And with the increasingly wide range of the Foreign Account Tax Compliance Act, you should know that your bank overseas will report information to the IRS.

Of course, that transparency makes it more important than ever that you file an FBAR (Report of Foreign Bank and Financial Accounts) if the aggregate value of your foreign bank account exceeds $10,000 at any time during the year.

Another point for soon-to-be-expats to consider: just because you will be living outside the U.S. does not necessarily mean you’ll still be writing checks to Uncle Sam. You will be able to make use of the Foreign Earned Income Exclusion to exclude a little more than $100,000 in income if you’re a single expat and a little more than $200,000 if you’re a married expat.

Regardless of how little or much you might owe, it’s likely a good idea to stay IRS compliant. Under a recent law, CNBC notes, tax delinquent expats can have their passports yanked by the State Department if their delinquency hits $50,000.

There can also be penalties and interest to deal with, and in some cases, criminal charges. In those instances, it makes sense to speak with a Cleveland or Chicago tax attorney experienced in defending client rights, financial interests and freedom.