The IRS Will Never Do These Things When Collecting Back Taxes 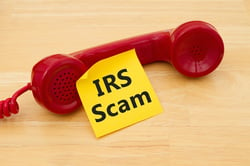 It is understandable how the scam works. A harsh, authoritarian voice on the other end of the phone tells the unsuspecting victim that the Internal Revenue Service has determined that the person has broken the law and subsequently owes a lot in back taxes.

The victim is offered a way out of their dire straits: Make immediate payment to get the IRS to end its investigation and let them off of the hook. Unfortunately, far too many people have fallen for the scam and lost their money to criminals and not tax collectors.

Spokespersons from a wide variety of federal law enforcement agencies recently delivered a couple of important messages about the calls many Americans have been receiving. First, that's not the IRS on the phone. Second, some of those placing the bogus calls and scamming Americans out of untold millions of dollars have been arrested.

The Department of Justice and other federal agencies want to remind you that the IRS will never do the following:

The IRS always contacts taxpayers first by mail about tax disputes, whether the matter involves failure to file, failure to pay taxes, a pending IRS audit or some other problem. There is always an opportunity for you to sit down with an attorney, discuss the matter and respond to IRS allegations or concerns.

Law enforcement officials urge you not to engage the scammer. Do not give the person any information. Simply hang up your phone and contact authorities.


However, if you receive a notification from the IRS in the mail over a tax controversy, you should contact a Chicago or Cleveland-area tax attorney to discuss your legal options.