Are You an Accidental American? 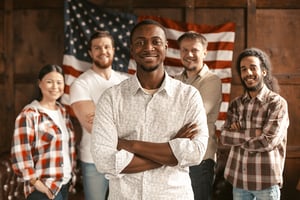 As odd as it sounds, some people may not realize they are considered Americans—until the tax man (or woman) comes calling.

The United States confers citizenship in a number of ways. Children who are born in the U.S. have a right to claim U.S. citizenship, even if their parents are not U.S. citizens. A child born to U.S. parents living abroad is also considered a U.S. citizen, as is anyone born in a U.S. territory. The spouse of a U.S. citizen can also find a path to citizenship.

For some, the ability to claim U.S. citizenship is a dream. For others who live abroad and have no real connection to the U.S., citizenship can introduce difficulty. Unlike most other countries, the U.S. bases its taxation policies upon citizenship—as opposed to regional residency. That means an individual born in the U.S. but who has lived their entire life elsewhere in the world may one day wake up to find they are an accidental American.

Whether expatriate or accidental American, U.S. citizens are required to file tax returns and other regulatory reports like an FBAR. Recall that an FBAR, or Report of Foreign Bank and Financial Accounts is required to be filed annually. For those who do not identify as Americans, that means an FBAR report is likely required on all of their financial accounts and holdings in the country where they reside. Income of a U.S. citizen is taxable, no matter where in the world it is earned.

For some, U.S. citizenship is a rude awakening. A bank may request a U.S. tax ID number in order to submit a FATCA report to the U.S. A visitor to the U.S., who is actually a citizen, may find they have difficulty entering the U.S. on a foreign passport. For expats or accidental Americans, shrugging off the IRS can lead to more trouble down the line. The IRS has a reputation for aggressive pursuit of foreign bank accounts. Although an individual with slim to no ties to the U.S. does not consider their regular bank account as an offshore tax tool—the IRS does.

Fortunately, whenever you discover you are an American, the IRS has a streamlined process for U.S. taxpayers who reside outside of the country. If this applies to you, the best practice is to work with a knowledgeable tax attorney who can help you create a correct, effective filing to the IRS the first time around with a minimum of hassle.