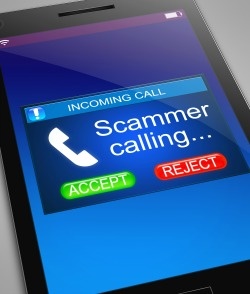 They might have called the wrong person when they dialed Michelle Singletary's number. The syndicated Washington Post columnist and author dispenses financial advice twice a week to the paper's readers. When she got a suspicious message from someone claiming to be from the Internal Revenue Service, she wanted to hear what scammers are saying to less savvy people in order to get them to send money.

So she called the number back and spoke with a man who said he was with the IRS. He didn't waste any time, immediately trying to put a scare into her by asking if she had an IRS criminal defense attorney.

She said she did not have one and wondered why she might need one. "You need an attorney," she was told. To that, she replied that she knew the call was part of the prevalent IRS scams out there.

The next sound she heard was a dial tone.

Just to be clear, the IRS does not call and threaten taxpayers over the phone, demanding immediate payment. If you hear anything like that in a call, experts say you should hang up. You can then check with the IRS to see if you do indeed have failed to file tax returns or if you have unpaid taxes.

If you have failed to file returns or failed to pay owed taxes, you can then work with a tax attorney to return to compliance.

But do not engage the people pretending to be with the IRS. Do not listen to their threats. Some of the scammers apparently promise riches; the scam is just as phony as the ones who promise prison if you do not do what they say.

The IRS is fighting the fraudsters, but the first and best line of defense is you, the informed taxpayer.