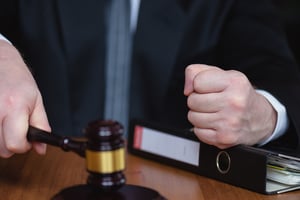 Making a mistake about interest paid, and where it was paid, is not unusual. But in speaking with bank regulators, Patrick Daley Thompson also misstated the amount of a loan he took out. He missed his actual loan amount by about $109,000. This was after the bank that lent him the money failed.

These facts underpin the tangled web that landed the Chicago alderman in front of a jury who convicted him on all counts after an approximately four-day trial. Mr. Thompson, the first member of his well-known political family to be convicted on a criminal tax charge, is also the first alderman to face trial on federal charges in more than twenty years.

According to federal prosecutors, Mr. Thompson did what a lot of people do. He filed a fraudulent tax return to reduce his tax liability. On his tax return, he claimed deductions for mortgage interest between the years 2013 and 2017. The phony deduction added up to about $15,589. The interest was actually paid on the bank loan with the now-defunct bank, Washington Federal.

Overall, the defense for Mr. Thompson centered on him being mistaken about the loan, of disputing the loan, and being too busy and distracted to attend to the accuracy of his income tax returns. When Washington Federal failed, its loans were transferred to another institution. Regulators at that bank questioned Mr. Thompson about his loan balance. He later stated he had forgotten about the second loan payment of $109,000 that had been made to him.

Prosecutors pointed out Mr. Thompson is a lawyer who clearly understood his actions. By 2018, Mr. Thompson attempted to amend his earlier tax returns to pay his tax liability. The amendments were rejected as untimely. The U.S. Attorney characterized Mr. Thompson this way, “When he saw an opportunity to lie, to deceive, to pay less than what he owed, he took it. And his lies follow a pattern.”

Sentencing for Mr. Thompson is set for July 2022. Each count of filing a false income tax return carries a maximum three-year sentence. Each count of making a false statement has a maximum term of 30 years. Assuming an otherwise clean record for Mr. Thompson, his sentencing may not approach maximum terms—but the damage to his livelihood, reputation, and family is already done.

Have you received a letter from the IRS? Speak with a skilled tax lawyer today