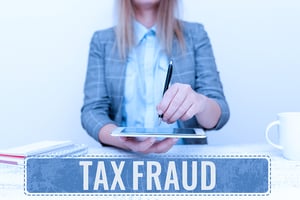 In pursuing ill-gotten tax refunds, Petra Gomez and her sister, Jakeline Lumusco, employed a very old scam. They prepared fake tax returns, submitted them to the IRS, and then sat back and waited for the refunds to roll in. Fraud involving tax preparers in the U.S. is common and the IRS focuses on individuals like Ms. Gomez and Ms. Lumusco who take advantage of unaware taxpayers as well as the IRS.

For this pair, the idea of submitting just a few fake tax returns was not going to provide the preferred payday. Instead, the sisters submitted more than 16,000 false tax returns. In order to avert suspicion, Ms. Lumusco and Ms. Gomez created five separate tax preparer companies under their own names, and the names of others. The companies served as a front for their tax return mill.

Tax fraud around income tax returns is relatively easy. A tax preparer can falsify a myriad of metrics on an individual or corporate tax return, including underreporting income, creating false deductions, and overstating deductions, among others. Sometimes the client is aware of the fraud, other times they simply sign as directed, pay the tax preparation fee, and leave believing all is well.

Because it is difficult to walk away from a cash cow, most tax fraudsters, like Ms. Gomez and Ms. Lumusco, do not stop until charges are brought against them. There are usually brief protests of innocence followed by quiet and determined work by criminal tax defense counsel to find a preferential plea deal. The longer a serious grift goes on, the less likely a defendant is to avoid prison time. Ms. Gomez and Ms. Lumusco were sentenced to eight and four years in a federal penitentiary, respectively.

Fake income tax returns can turn a quick buck. They are also prime evidence in a case against the individual who prepared them. If you have received a letter from the IRS or believe you are under investigation, speak with a reputable criminal tax defense attorney as soon as possible.

From offices in Chicago and Cleveland, the tax attorneys at Robert J. Fedor, Esq., LLC help individuals and entities nationwide respond to tax litigation, IRS audits, and other tax controversy. When you need responsive, legal advice locally or abroad, contact us or call 800-579-0997.