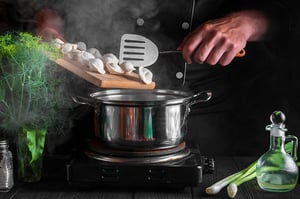 San Gabriel, California entrepreneurs known for their soup dumplings are putting tax evasion behind them by pleading guilty to reduced charges.

In early 2021, California closed in on a group of restaurants owned by Yan Lu and William Lu, siblings who run a group of successful dumpling houses. More than news, the story offers instruction on how business owners get into tax controversy, and what actions can serve to get them out.

By 2018, California officials were investigating Mama Lu’s Dumpling House and related outlets.  According to the California Attorney General, the tax investigation revealed the family had been systemically underreporting sales and avoiding payment of state sales tax by providing fraudulent monthly sales reports for their restaurants. As we note routinely, where there are ill-gotten gains, there is usually a false income tax return. Yan Lu was charged with filing a fraudulent tax return.

California Attorney General Xavier Becerra noted, “For ten years, the defendants in this case chose to disregard the law and put their bottom line ahead of the interests of California taxpayers.”

Overall, a Felony Complaint charged the pair with 17 tax crimes with special allegations including white collar crime enhancement—a count that can lead to prison, rather than a county jail. We wrote earlier of another business owner who not only ignored an IRS criminal tax investigation but defied it by winding down business of an at-issue company and starting another to carry on the same scam. The result of that decision was a prison term.

The Lu siblings handled their predicament much differently. Charged with criminal tax fraud in the Felony Complaint in January 2021, by August 2021 an agreement had been reached whereby Mr. Lu pled guilty to filing a false sales tax return and conspiracy to file a false sales tax return. Ms. Lu pled guilty to the same, with the addition of filing a false income tax return. Ms. Lu will serve a three-year sentence—one year in the county jail with two years under mandatory supervision. Mr. Lu will serve four months in the country jail with two years of felony probation. By the time their guilty plea was announced, they had paid $2,184,696 in restitution owed to the state.

While headlines and sentencing make for interesting reading, the process by which business owners get into—and out of—hot water is important to understand. Making good decisions when facing bad consequences is critical to preserving business interests, careers, and personal lives. The Lu siblings may have cooked the books, but showed legal savvy to mitigate the impact of the allegations when they were caught red-handed. Neither is going to prison and it is likely their businesses will continue to operate.

It is never too soon to get experienced legal advice if you are engaged in practices which the IRS is likely to investigate. When you have questions or are involved in an IRS civil or criminal tax audit, speak with a reputable tax attorney.

With offices in Cleveland and Chicago, the tax lawyers at Robert J. Fedor, Esq., LLC provide answers to your questions about your business tax return, or concerns you might have about offshore tax or other compliance issues. When you need experienced tax advice, call 800-579-0997 or contact us.