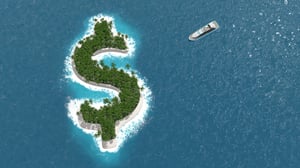 Finance & Development, the quarterly magazine of the International Monetary Fund (IMF), recently took a look at the crises ensuing from corruption and the global use of secret offshore tax havens.

Established in 1944, the IMF works to stabilize the monetary system that crisscrosses this globe.  The system, described by the IMF as “the system of exchange rates and international payments that enables countries (and their citizens) to transact with each other,” is the foundation on which international trade and the worldwide economic picture resides.

The September issue of Finance & Development looks at “Hidden Corners of the Global Economy,” and illustrates the methods by which money laundering and foreign bank accounts keep impoverished regions impoverished.

The issue is well worth digesting for current opinion and information on the common practice of taking money off the table where it can be hidden and grown while remaining untaxed. There are a lot of angles to the issue. Here are some overall points:

The true amount of the world’s wealth that is being structured away from legitimate tax authorities is difficult to calculate. Privacy and services are important for individual and corporate entities wishing to shield and grow their wealth legitimately. As noted by the IMF, “Vast sums of money that could be used to improve lives are stashed in tax havens or lost to corruption.”

Are you concerned about allegations by the IRS? Speak with an experienced IRS tax attorney

If you believe you could be the focus of an IRS criminal investigation or audit, it is critical to get strategic counsel sooner than later. Whether you face a personal or corporate audit, we are agency experienced attorneys. Nationwide, you can reach us at 800.579.0997 or contact us online.